“Kim Jong Un of North Korea Proclaims ‘unwavering faith in President Trump.’ Thank you Chairman Kim. We will get it done together!” Trump wrote on his Twitter account. 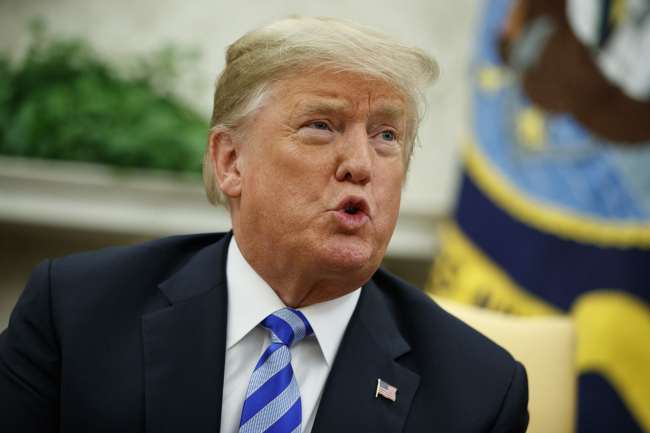 US President Donald Trump. Yonhap
The message was a response to revelations by Seoul’s National Security Office chief Chung Eui-yong, who headed the special delegation to Pyongyang on Wednesday.

“He made it clear that his trust in President Trump is unchanged. (Kim said) that there are some difficulties in North-US negotiations, but he will maintain his trust in Trump,” Chung said at a briefing on Thursday.

Chung went on to relay Kim’s statement that he has never negatively assessed the US president at any time.

“Kim said that he would like to build on this trust to end the 70 years of hostilities between the North and the US within Trump’s first term, improve relations and achieve denuclearization,” Chung said.

Chung is said to have delivered a message from Trump to Kim during his visit and come back with a message for Trump from the North Korean leader.

Chung did not elaborate on the message from Kim, but said the North Korean leader had expressed exasperation because he felt that North Korea’s efforts to achieve denuclearization were being undervalued. He also said he hoped for an environment that would allow him “to believe that the decision to denuclearize was the right choice.”

Kim’s message was conveyed to US national security adviser John Bolton over the phone at 8 p.m. on Thursday, Korean time, according to Cheong Wa Dae spokesman Kim Eui-kyeom.