[ The Korea Herald – Send E-mail ]
[Herald Interview] Meet Lala school, the teachers group out to improve Korean sex ed
Sex education teachers stress importance of identifying differences between romance and violence, and shedding gender stereotypes
By Lim Jeong-yeo
Published : Sep 6, 2018 - 17:27
Updated : Sep 16, 2018 - 11:04
Learning how to properly love and respect another person should come before learning how to avoid pregnancy, according to Lala School, a new sex education institute, which is trying to foster comprehensive sex education in Korea that enables adolescents and adults to make informed decisions.

In a television broadcast, Lala School sex education teacher Shin Yeon-jeong described dating in Korea as being like a masquerade in which people dress up in society’s concepts of femininity and masculinity.

She cautioned that when people regurgitate what is fed to them by popular media, they may end up trying to play roles that don’t fit and ultimately create discomfort.

Lala School was founded in 2017 by Shin and her colleagues Lee Su-ji and Roh Ha-yeon, all of whom hold firm beliefs in gender equality and sexual autonomy.

Shin, considered to be the most outspoken teacher at Lala School, was unable to join the interview, but Lee and Roh sat down with The Korea Herald at a cafe in Geumcheon-gu, Seoul, to share the private institute’s curriculum and anecdotes from their sessions with children.

As premarital sex is socially frowned upon, information on contraception is often deemed irrelevant and unnecessary in sex education for minors. Youngsters are told to avoid pregnancy, but not given pragmatic guidance on how to use contraception. Ironically, when these youths do reach adulthood, they find it hard to find helpful sex education materials or courses that are suitable for adults.

Against this backdrop, Lala School offers a lifelong program that starts from age 5, the age at which UNESCO recommends children start sex education, and continues to adults well into their senior years.

“A comprehensive sex education covers personal hygiene, privacy, how to think for oneself and how to communicate one’s feelings with others,” Roh said. “Sex education is much more than the body, it’s essentially how we perceive our body and how we form a relationship with others that is equal, safe and autonomous.”

Lala School follows the UNESCO guidelines for CSE, which is a curriculum-based process of teaching and learning about the cognitive, emotional, physical and social aspects of sexuality.

“In our sessions with 5-year-olds, we start from how to wash hands to potty-training and building public toilet etiquette. Then as we move up the age (groups) we discuss social issues pertaining to sexuality,” Lee said.

In a brainstorming session, attendees are encouraged to find ways to seek permission when making physical contact with someone.

“We ask kids how they would make ‘skinship’ with a person they like,” Roh said, “And the most common answer is to ‘hit the wall.’” 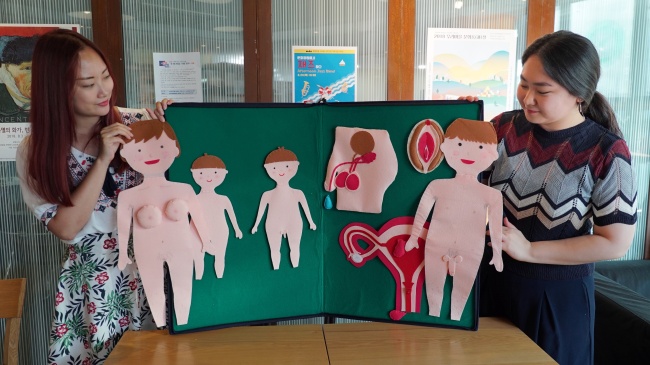 In Korea, “skinship” is a term that refers to intimate acts such as holding hands and hugging. “Hitting the wall,” originally from the Japanese expression “Kabe-don,” is a common scene in TV dramas, in which a man slams his hand against a wall in a way that pushes a woman against the wall. This then often leads to the exchange of intense gazes, confession and possibly a kiss.

“That’s all the kids can think of, because they haven’t been shown another way. They mimic what they have been exposed to in the media, where they are indirectly taught that it is ‘breaking the mood’ to verbally seek permission,” Lee said.

Roh said the second most common idea for the students is to invite a potential romantic partner to have ramen together at their home, a romantic gesture equivalent to “Netflix and chill.”

“The problem with this approach is that the only thing explicitly proposed here is having ramen,” Roh said. “If the speaker had other motives than having noodles, but the other party took the offer at face value not assuming anything else would happen, this misunderstanding could lead to unintended sexual violence.”

To prevent such an unfortunate situation, Lala School stresses expressing what’s going through one’s mind and then always seeking direct permission, which is related to building person-to-person trust and a bond.

Lee and Roh showed study materials they use for their sessions -- a felt board with dolls of naked female and male bodies, both before and after puberty, attached with Velcro. The board also displays felt dolls of both genders’ external and internal sexual organs. 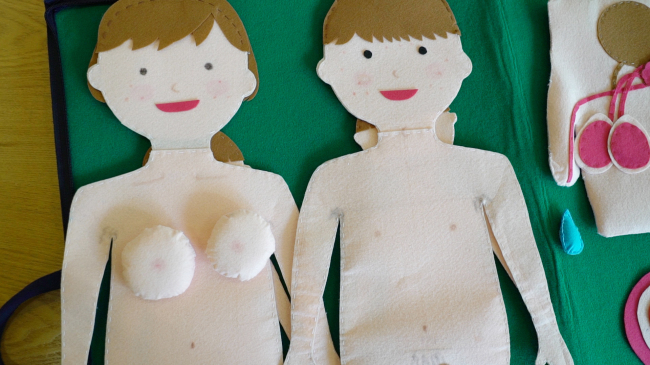 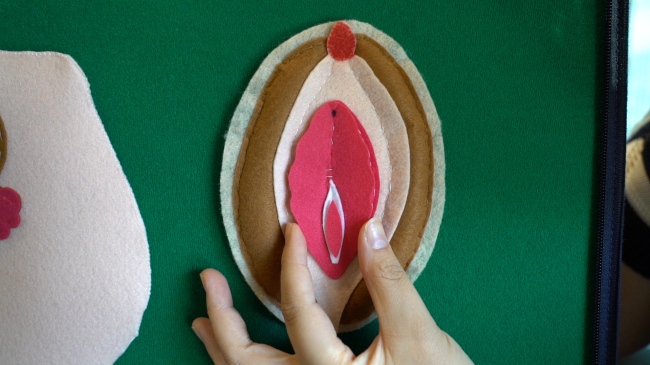 In the sessions where they teach adolescents about each gender’s sexual organs, Lala School teachers allow students to touch the detailed felt reproductions of genitalia, but only after the students ask for permission.

“What the children need to learn is how to express love and affection,” Lee said.

“In conventional sex education, children are taught how to prevent pregnancy. But the thing is, they don’t even know what sex is in the first place. I’m not talking about the physical contact of sexual organs, but how to hold hands, how to meet another person’s gaze, how to show a person you care for them, what other ways of expressing love there are, other than the three words ‘I love you,’” Lee said.

Lee said that due to the lack of proper sex education, Korean children grow up to lack skills to share their emotions, which could lead to crimes and other social problems.

As Korean students advance on to higher grades, less time is given to sex education. “We interpret it as schools here putting more value on the students’ grades for matriculation to elite colleges than on sex education and emotional cultivation,” Roh said.

“Parents have difficulty offering sex education to their children because they have not been taught themselves,” Lee said. “Without education, ideas that have been around for generations get passed down and change cannot take place.”

The teachers at Lala School are feminists and proponents of LGBTQ rights, but this is not something they admit at the beginning of their classes. They wait until the lessons are done to tell their audience that they are feminists.

“They’re almost always surprised to find that what they were taught is feminism. They are more open to embracing feminism after the gender equality sessions, after they realize that feminism isn’t about female superiority over men, but more of understanding another sex, and communicating,” Roh said.

Lala School’s first office was at a symbolic location: a renovated former brothel in Geumcheon-gu, Seoul. But after the summer’s intense humidity caused mold to break out, the teachers moved to a different location.

Their goal is to periodically move between districts with limited sex education. Next year’s location could be in Yongsan-gu, the teachers said, where there is a dearth of sex education institutes.