A UN anti-discrimination body recently said the 2015 deal -- in which Japanese Prime Minister Shinzo Abe offered his “most sincere apologies” to all former sex slaves in Korea and provided 1 billion yen ($9 million) to set up a fund to help the victims -- did not “provide unequivocal responsibility for the human rights violations committed against these women.”

According to the news report, Park in 2016 ordered her staff to pressure both the Foreign Ministry and the Supreme Court to delay ruling on the case, in an attempt to “improve” ties with Tokyo in light of the 2015 controversy. 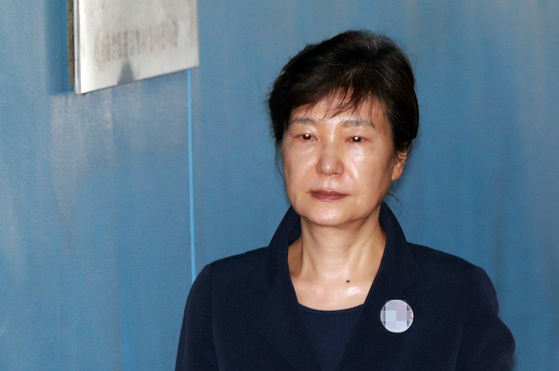 South Korea`s ex-President Park Geun-hye. (Yonhap)
She allegedly told her staff that it would be a “disgrace” for South Korea if the Supreme Court ruled in favor of the Korean victims so soon after the 2015 deal was signed, according to the news report.

The report also alleged that Park specifically ordered her staff to pressure the Foreign Ministry to file a statement with the Supreme Court concerning the suit after August 2016. Tokyo transferred the pledged 1 billion yen to the Korean government in August 2016.

The Foreign Ministry indeed filed a statement with the Supreme Court in October 2016, two months after Seoul received the compensation funds from Tokyo.

In the statement, the Foreign Ministry said Seoul-Tokyo relations could “irreversibly deteriorate” should the court rule in favor of the plaintiffs, who say they were forced to work at Japanese firms -- Nippon Steel & Sumitomo Metal Corporation and Mitsubishi Heavy Industries -- during Japan’s colonial rule of Korea.

“South Korea may be perceived as a country that does not comply with international laws by the international community,” the ministry also added, should the court rule in favor of the former forced laborers “in spite of” the 2015 Seoul-Tokyo deal, which both countries had agreed to recognize as “permanent and irreversible.”

Yang Sung-tae, a former Supreme Court Chief Justice, is currently under investigation for allegedly having used politically sensitive trials, including the one involving Koreans subjected to forced labor by the Japanese, as bargaining chips for political favors from the Park Blue House.

Park's father, the military strongman Park Chung-hee who ruled South Korea from 1961 to 1979, studied in Japanese military academies and served in the Japanese imperial army during the colonial rule.