Lee Seung-woo grabbed a brace at Pakansari Stadium in Cibinong, south of Jakarta, on Wednesday to put South Korea's under-23 side one step closer to their Asiad title defense.

The defending champions will next face the winners of the match between Japan and the United Arab Emirates at the same venue on Saturday. 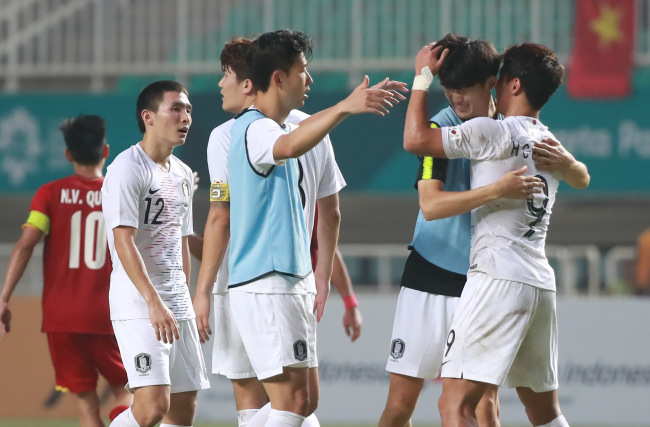 South Korean footballers celebrate after winning against Vietnam on Wednesday. Yonhap
After missing the quarterfinals due to knee injury, Jo Hyeon-woo returned to wear the gloves for South Korea.

South Korea got off to a good start. Hellas Verona attacker Lee struck a left-footed strike that found the corner of the net in the sixth minute.

Hwang Ui-jo then doubled the lead in the 28th minute with his right foot following a through ball from Son. It was his ninth goal of the tournament.

Trying to cut the deficit, Vietnam took out midfielder Pham Duc Huy for forward Nguyen van Quyet in the 30th. They then took out captain Luong Xuan Truong for Tran Minh Vuong to start the second half.

Lee Seung-woo collected his second goal of the match in the 55th minute. He sent a through ball to Hwang Hee-chan running inside the box. The Vietnamese defenders were able to block Hwang but couldn't stop Lee's follow-up.

South Korea then substituted Hwang Ui-jo for Na Sang-ho in the 59th, apparently to rest their goal machine for the final match.

But Vietnam didn't give up. In the 70th, Tran Minh Vuong scored with a right-footed free kick that beat Jo. It was the first time that Jo had conceded a goal at this Asian Games.

South Korea then rested Son for right back Lee Si-young in the 72nd.

Vietnam made their final substitution in the 76th, hoping to score more goals. Nguyen Cong Phuong came on for Nguyen Anh Duc.

Pham Xuan Manh nearly gave Vietnam another goal following a corner kick in the 83rd, but this time it was saved by Jo.

Lee Seung-woo attempted a hat trick with his right-footed strike in the 83rd, only to see his shot denied by Vietnam goalkeeper Bui Tien Dung. His move was then replayed by center back Hwang Hyun-soo two minutes later.