The team of Baek Jin-hee, Jang Woo-young and Lee Da-gyeom scored a total 4,924 points after five rounds to edge Japan, which had 4,851 points, out for gold medal. 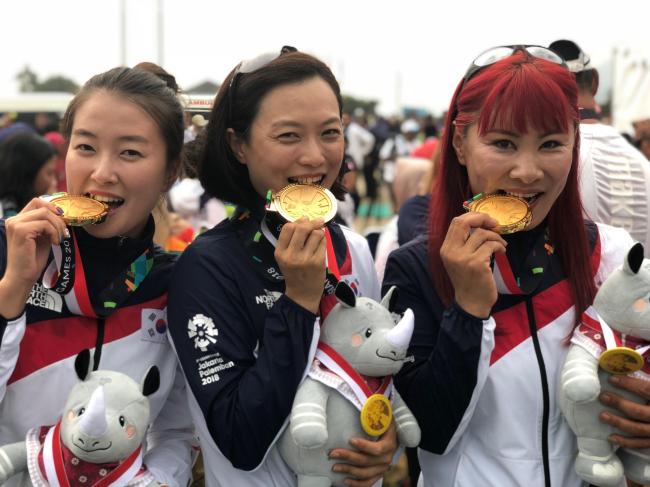 Lee Da-gyeom (left) Jang Woo-young (center) and Baek Jin-hee pose with their gold medals. Yonhap
Paragliding became an official medal sport for the first time at this year's Asian Games. The cross country is an event in which paragliders round target locations and are judged by their accuracy and speed. Each team takes five flights.

In the team competition, the two best scores out of three per team were added for the team total. With the women's team gold on the line, South Korea was leading Japan by 320 points through four rounds. But in the fifth round, Baek and Lee coudln't finish their flight and each managed 124 points.

Lee came through with 461 points for a team total of 585 points in the fifth round.

The South Koreans at first didn't think they'd done enough to win the gold. But Japan scored 832 points in the final round and still finished 73 points behind South Korea overall. (Yonhap)