The team of Na Ah-reum, Kim You-ri, Kim Hyun-ji and Lee Ju-mi topped the competition at Jakarta International Velodrome in Jakarta after edging China in the final with an Asian Games record time of 4 minutes, 23.652 seconds. The previous Games record was 4:24.796, set by South Koreans on Monday in the qualifying stage.

The race officials originally clocked South Korea's time at 4:31.222, but it turned out that the cyclists raced 17 laps, instead of 16, after the organizers failed to show remaining laps correctly on the electronic board. 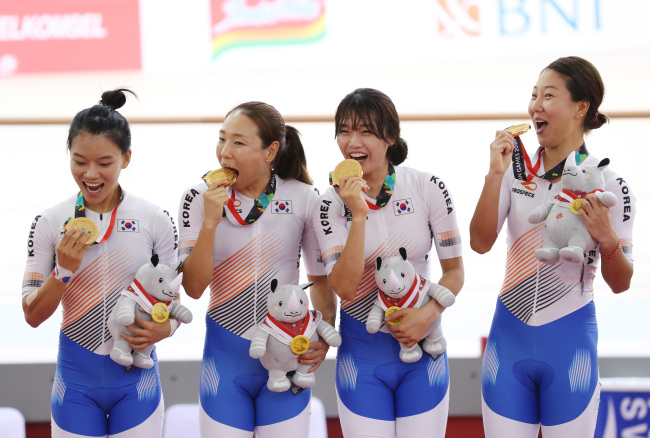 (Yonhap)
South Koreans caught China on their fourth lap to seal the gold, but they continued to race for the record. Japan, meanwhile, took bronze.

This was South Korea's first gold in women's team pursuit track cycling event at the Asaid. It took silver at the 2014 Incheon Asian Games.

The women's team reached the final by finishing second in the first round heat with a time of 4:43.245.

South Korean women also avenged their defeat at Incheon 2014 where they settled for silver after losing to China.

"We didn't really think about the Incheon Asian Games," Lee said. "Instead of thinking about beating China, we just focused on executing what we did in our practice."

Earlier in the day, the men's team was eliminated in the first round, after Im Jae-yeon crashed with Min Kyeong-ho and failed to complete the race.

The team comprised of Im, Min, Kim Ok-cheol, and Shin Dong-in was considered a gold medal contender after setting an Asian record with a time of 3:56.247 in its preliminary on Monday.

South Korean men won back-to-back titles in 2006 and 2010, and grabbed silver in 2014. The women's team said it wants to share its gold medal with the men's team.

"We know the men's team had an unfortunate accident, but this is just the beginning," Na said. "We're about to start long distance events and I hope we can all do well in those events."

In team pursuit, two teams of four cyclers start on opposite sides of the track and race over 4km, or 16 laps. The team that catches the opponent or completes the ride in the fastest time wins the race. (Yonhap)