Na claimed her third gold medal at Jakarta-Palembang 2018 after topping the women's team pursuit track cycling event at Jakarta International Velodrome in Jakarta, with her teammates Kim You-ri, Kim Hyun-ji and Lee Ju-mi. She had previously won the individual race and time trial gold medals on the road. 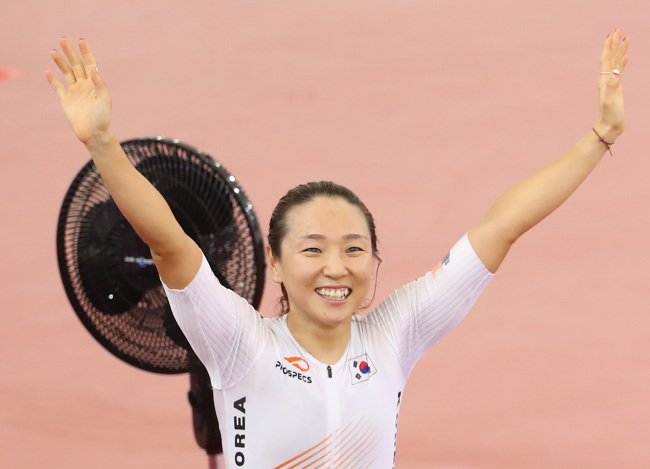 (Yonhap)
Jang, who now serves as a coach for the national cycling team, became triple gold medalist at the 2006 Asian Games in Doha.

"I'll try to become an athlete who can exceed Jang," Na said after winning her third gold medal. "I still can't believe that I'm the first female cyclist to win three gold. If I go back home and see my family, I'll really enjoy this victory."

"It's really physically challenging for me to race on both track and road," she said.

Jang gave credit to Lee for her achievement. Lee helped Jang to win a gold medal on the individual race on the road. She then prepared track races before Jang, and gave advice.

"(Lee) Ju-mi practiced on the track three days before me, and she told me that it's going to be better and better," she said. "I just ride it with that belief. I trusted my teammates."

Na will target her historic fourth gold in the women's madison, a relay event where two cyclists compete as a team. Na will team up with Kim You-ri.

When asked about whether she is confident to win her fourth gold, Na simply said: "I will give my everything. I don't want to leave anything behind." (Yonhap)