Lee, 66, a seven-term lawmaker, is leading opinion polls by a large margin. The seasoned politician has close ties to President Moon Jae-in. He served as prime minister from 2004-2006 under the administration of President Roh Moo-hyun. President Moon was Roh's chief of staff. 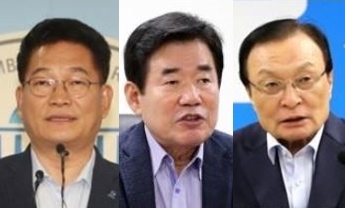 This image shows three candidates running in the election to be the ruling Democratic Party`s chief. From left, they are Song Young-gil, Kim Jin-pyo and Lee Hae-chan. (Yonhap)

Lee's supporters said that if elected, he would set better relations with the presidential office Cheong Wa Dae, while opponents call him an old-guard politician unfit for leading party reform.

Kim Jin-pyo, a 71-year-old four-term lawmaker, emphasized his experience as an economic expert at a time when the Moon government is being slammed by opposition parties for its tepid economic performance. Kim served as the finance minister from 2003-2004.

Opposition parties have stepped up their offensive against Moon's signature policy of "income-led growth" amid a slowing economy and sluggish job growth.

Song, a 55-year-old four-term lawmaker, called for a generational change of party leadership. He was until recently the chairman of a presidential panel designed to seek economic cooperation with Eurasian countries. (Yonhap)