The South Korean fired a nine-under 63 on Friday to finish in a tie with Lizette Salas at 13-under 131 as they completed their second rounds before heavy rains caused a four-hour delay.

The second round will resume early Saturday at the Brickyard Crossing Golf Course in Indianapolis, Indiana. 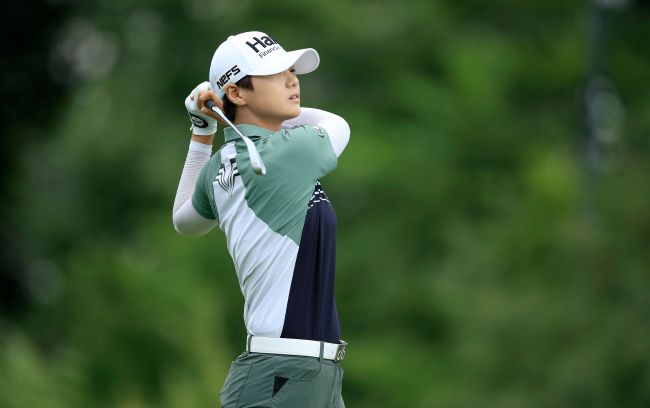 (Yonhap)
Park said her superb performance was anchored by a strong putting day.

She posted three birdies on the front nine and six on the back to shoot the low round of the day.

"I'm going to do really well," said Park. "I feel really good about my game, especially my short game, since my practice.

"And it's just about the weather now, so hopefully, the weather's good."

Play on Friday was first suspended and the players were told to leave the course on the second day of heavy rains at the event. Play resumed four hours later but ultimately play had to be suspended because of darkness.

Salas, who shot a 62 on Thursday, had another solid day of ball striking.

"I had to change my mentality a little bit. I had to forget about the 62 in a way and just go back to what I was doing. And so yeah, a lot of positives," she said.

Danielle Kang and Nasa Hataoka sit two back of Park and Salas at 11-under par.

Once the second round is complete, the 36-hole cut will be made. Defending champion Lexi Thompson has 10 holes to complete, but currently sits well inside the cut line at six-under par. (AFP)