Hwang Ui-jo scored a hat trick at Si Jalak Harupat Stadium in Bandung, Indonesia, for Korea to collect their first win in Group E, where they will also face Malaysia and Kyrgyzstan.

Korea are the defending champions of the Asian Games men's football tournament. The Taeguk Warriors have four Asian Games titles, tied for most with Iran. 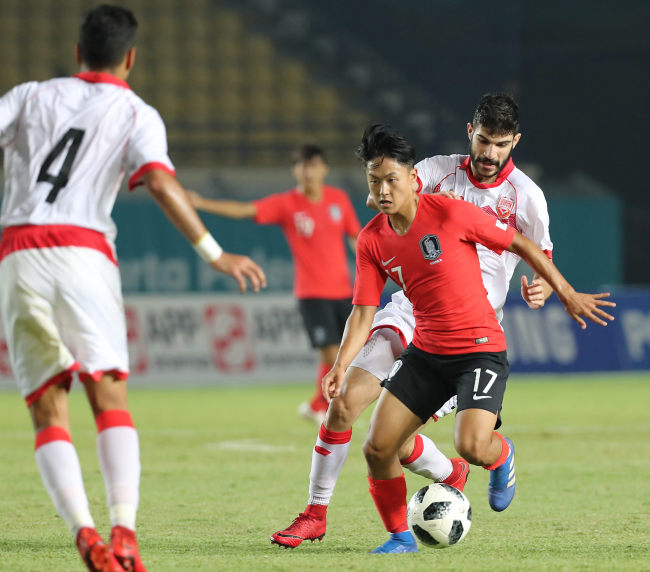 (Yonhap)
Resting their top star, Son Heung-min, on the bench, Korea scored five goals in the first half, using a 3-5-2 formation.

Hwang, who joined the team as one of the wild card members for Korea, opened the scoring in the 17th minute after receiving a pass from Kim Moon-hwan. Left wing back Kim Jin-ya then doubled the lead for Korea in the 23rd.

Hwang made it 3-0 in the 36th and Na Sang-ho put his name on the scoring sheet in the 41st. Hwang, who plays for Japanese side Gamba Osaka, then completed his hat trick in the 43rd minute with a right-footed strike.

In the second half, Korea substituted Hwang Ui-jo and Hwang In-beom for Lee Seung-woo and Hwang Hee-chan to boost their attack.

Hwang Hee-chan made it 6-0 to seal the victory for Korea in second-half stoppage time with a free kick.

The men's football competition at the Asian Games is open to those who are aged 23 or under, but teams can field up to three overage players known as wild cards. Son, Hwang Ui-jo and Daegu FC goalkeeper Jo Hyeon-woo, who made his name internationally at the

2018 FIFA World Cup, were selected for wild cards for this year's Asian Games.

"Korea always had hard times in their opening match, but this time our players overcame that challenge," Korea's head coach Kim Hak-bum said after the match. "I really want to congratulate our players."

Korea will next face Malaysia on Friday. They'll then wrap up their group stage campaign with Kyrgyzstan on Monday. Kim said Korea will play better as the tournament goes on.

"It's meaningful that our players finished the match without conceding a goal even if they didn't have much time to practice together," he said. "Our teamwork will get better and better."

The men's football competition at the Asian Games features 25 teams in six groups. Top two teams from each group and four best-performing third-placed teams will advance to the round of 16.