Kim won the Thornberry Creek LPGA Classic by nine strokes over Spain's Carlota Ciganda at Thornberry Creek at Oneida in Oneida, Wisconsin, on Sunday (local time). She fired a 7-under 65 in the final round for a four-day total of 31-under 257.

Kim broke the 72-hole scoring mark on the LPGA Tour that was previously held by her and Annika Sorenstam. Kim had a four-day score of 27-under at the 2016 JTBC Founders Cup, while Sorenstam posted that same score at the 2001 Standard Register Ping in Phoenix.

She also set the new scoring record in relation to strokes, previously owned by Karen Stupples, who hit 258 at the 2004 Welch's/Fry's Championship. Kim made 31 birdies at Thornberry, also a LPGA record for 72 holes. 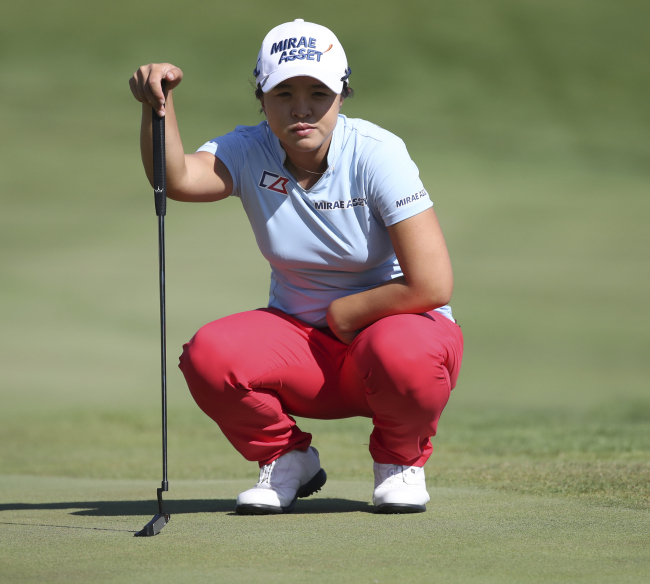 South Korean golfer Kim Sei-young (AP-Yonhap)
Kim is now the first golfer in LPGA history to get past 30-under. In the men's PGA Tour, Jordan Spieth and Ernie Els are the only two golfers to finish a 72-hole event at 30-under or better.

Sealing her seventh win on the LPGA Tour seems to have been easy for Kim, who entered the final round with an eight-shot lead after matching Sorenstam's 54-hole record. The 25-year-old South Korean carded 24-under in three days to match Sorenstam's record.

Kim said it was a "dream come true" to match Sorenstam's record. The only mistake she made in the tournament was a double bogey on the 17th hole in the second round.

"I set my goal today for a bogey-free round," Kim was quoted by saying to LPGA.com. Friday. "After I shot 27 under [at the 2016 JTBC Founders Cup to tie Sorenstam's record] I wanted the 72-hole record."

Kim, who made her LPGA debut in 2015, started by making four birdies on the first nine holes. She surpassed her own and Sorenstam's record with a birdie on nine. She then added birdies on 10, 12 and 15 to achieve the milestone.

This was Kim's first LPGA win this season. Her last LPGA victory was in May 2017 when she beat Ariya Jutanugarn at the Citibanamex Lorena Ochoa Match Play.

It was also the seventh win by a South Korean during this season's LPGA Tour. (Yonhap)