Now that ugly duckling has changed into a swan with his inspiring performance, especially with South Korea's 2-0 win over Germany at Kazan Arena on Wednesday.

Kim scored South Korea's opening goal in the 94th minute from close range. His scoring was initially ruled offside, but after a video review, it was ruled a legitimate goal. 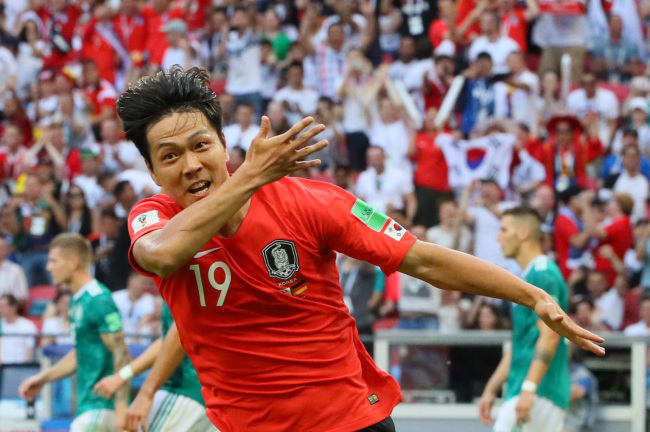 South Korea`s Kim Young-gwon celebrates after he scores a goal against Germany in their 2018 FIFA World Cup Group F match at Kazan Arena in Kazan, Russia, on June 27, 2018. (Yonhap)
"I really prayed and prayed for it to be a goal," Kim said. "If we scored first, I thought the Germans would rush, so it would be a good situation for us."

Kim became public enemy No. 1 for local fans following his remarks after South Korea's World Cup qualifier against Iran at home on Aug. 31. He then said the players couldn't really communicate on the pitch because of fans' loud shouting from the stands, which angered many South Koreans, with some saying they will not make noise for the national team anymore.

Kim later apologized for his comments, but it was like a stigma, making him mentally stressed whenever he competed with the national team.

The Guangzhou Evergrande defender, however, put aside all of his past with his performance at the World Cup. Even in South Korea's 1-0 loss to Group F opener and 2-1 defeat to Mexico in the next match, Kim was acclaimed for his hard-fought efforts and sacrifices on the pitch.

"Those hard times really helped me to come this far," he said.

"If I didn't had that incident, I may not have scored a goal like today. Fans' criticism made to improve and work harder."

Kim, who is in his second World Cup, said a win is a win, but his team cannot be happy because they failed to advance to the round of 16 even with a stunner over Germany. South Korea finished third in Group F, with Sweden and Mexico grabbing a ticket to the knockout stage.

Kim said South Korea's win against Germany was a result of teamwork.

"I had some stamina left, so I thought I needed to cover the pitch more for my teammates," he said. "But today, not only defenders but our attackers also played well in defense, and that's why we collected this result." (Yonhap)