South Korea blanked defending champions Germany 2-0 in their final Group F match at Kazan Arena in Kazan, some 800 kilometers east of Moscow. This was South Korea's first win at the 2018 World Cup after losing 1-0 to Sweden and falling 2-1 to Mexico. Shin Tae-yong's side finished third in Group F ahead of Germany.

The loss against the world's No. 1 team would have forced South Korea to return home with three straight losses. Since making their World Cup debut in 1954, South Korea have only finished the tournament with three losses only once. The Taeguk Warriors went home with three defeats at the 1990 World Cup in Italy where they faced Spain, Belgium and Uruguay in the group stage. 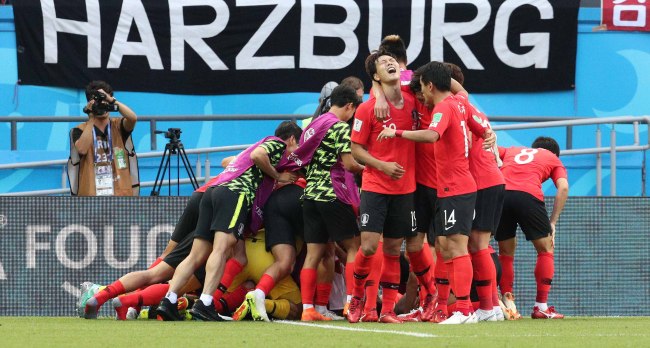 (Yonhap)
South Korea also avoided another shameful record in their history book as the latest result didn't lead up to four consecutive defeats in international matches, which would have been the first time for the senior national football team.

The win also kept South Korea from joining the list of Asian Football Confederation members without a victory. At Russia 2018, Australia will be the only AFC representatives to wrap up the tournament without a win. Australia finished last in Group C, following France, Denmark and Peru with one draw and two losses.

Saudi Arabia took third place in Group A behind Uruguay and Russia with one win and two losses, while Iran were No. 3 in Group B with one win, one draw and one loss behind Spain and Portugal.

Japan are currently leaders in Group H with one win and one draw and have positioned themselves well to qualify for the round of 16. Japan will meet Poland in their last group stage match on Thursday. (Yonhap)