South Korea needed to beat Germany by at least two goals and have Mexico defeat Sweden in the other Group F match Wednesday. The Taeguk Warriors took care of their own end at Kazan Arena in Kazan, some 800 kilometers east of Moscow, with Kim Young-gwon and Son Heung-min each scoring in second-half stoppage time. But Sweden made it all moot by beating Mexico 3-0 in Ekaterinburg.

Germany unceremoniously bowed out of the tournament with three points, losing to South Korea in goal difference and becoming the third straight World Cup champion to miss the knockout stage in title defense. 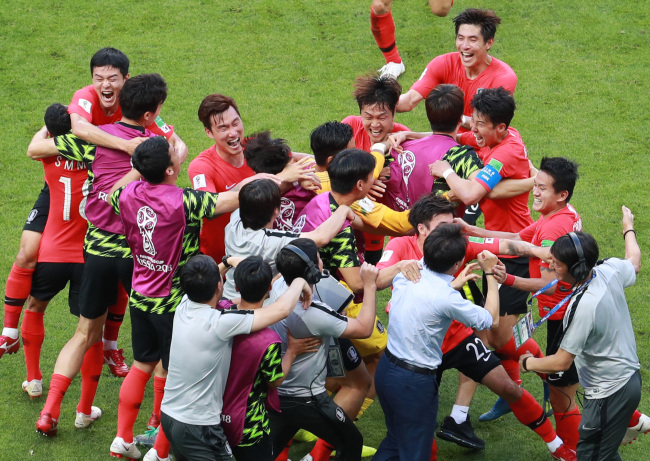 (Yonhap)
When the match seemed destined for a scoreless draw, South Korea drew the first blood three minutes into the stoppage time.

Following a corner kick taken from the left, the ball bounced to the feet of wide open Kim Young-gwon, who poked it home past Manuel Neuer in net.

The goal was initially wiped out on an offside call, but a review by the video assistant referees overturned the decision on the field, giving South Korea a 1-0 lead over shell-shocked Germany.

The Sweden-Mexico match had been over, and Germany needed to beat South Korea to squeeze into second place. Neuer moved far out of the net to join the attack and left the net empty. South Korea took advantage six minutes into the stoppage time, as Son chased down a long clearing attempt and rolled it into the gaping net.

South Korea head coach Shin Tae-yong stuck to the 4-4-2 system for the second straight match but made a few lineup changes for the third straight match.

On the attack, two players with extensive club experience in the Bundesliga, Son Heung-min and Koo Ja-cheol, got the nods as forwards.

Son also wore the captain's armband, with the incumbent Ki Sung-yueng sidelined with a calf injury.

Jang Hyun-soo, a much-maligned center back from the first two matches, took Ki's spot as a holding midfielder, alongside Jung Woo-young.

Jang's shift meant an opening on the backline, and Yun Young-sun made his World Cup debut as a center back next to Kim Young-gwon.

Lee Yong got his third straight start as left back, with Hong Chul in for the first time on the right side.

Lee Jae-sung and Moon Seon-min were the attacking midfielder, with Lee moving down from the forward position against Mexico last Saturday to his natural spot.

The teams were scoreless in the dull opening half. Germany played keep-away in the early moments but failed to put much pressure on the defense. And it was South Korea who had the first dangerous opportunity of the match in the 19th minute.

Jung Woo-young took a free kick from a few meters outside the box, and German keeper Mauel Neuer misjudged the flight of the ball, as he failed to make a clean grab.

The loose ball bounced just to his left, but Neuer barely beat Son Heung-min to it and punched it out of harm's way.

Germany had a decent look in the 39th in a scramble following a corner, but Mats Hummels couldn't get a shot off in the crowd.

The match opened up a bit at the start of the second half. And South Korean goalkeeper Jo Hyeon-woo, the team's best player in the tournament, once again rose to the occasion to keep his side in the game.

In the 47th, Joshua Kimmich set up a wide-open Leon Goretzka for a header right at the goalmouth, but Jo jumped to his right and parried it away.

Four minutes later, Timo Werner launched a volley from the penalty spot after a fine Mesut Ozil feed, only to send it wide left of the net.

Just after the hour mark, Toni Kroos fired a shot off a teammate after a fast break.

But South Korea started pushing back, getting deep into the German zone with a purpose.

Moon Seon-min found himself with the ball near the penalty spot in the 66th, but he failed to take a shot when the lane opened up briefly, before help arrived and foiled his opportunity.

Some two minute later at the other end, Mario Gomez got off a header that went right into the outstretched arms of Jo.

The teams continued to trade chances, with Son rolling one just left of the goal in the 78th minute, and Hummels missing the target with a header in the 86th.

Jo remained tall in the South Korean net, and denied Tonyi Kroos on a low shot in the 87th minute.

Though Germany had 26 shots attempts to South Korea's 11, they looked disjointed at times, not showing the kind of quality in the final third that has made them the No. 1-ranked team. And though a draw would still have knocked Germany out of the World Cup, South Korea made sure they paid dearly for some sloppy play. (Yonhap)