South Korea will take on defending champions Germany in their final group stage match at Kazan Arena in Kazan, some 800 kilometers east of Moscow, on Wednesday.

South Korea sit in last place in Group F with two losses, but they're still in contention for the round of 16. If they beat Germany, and Sweden lose to Mexico, then the three teams excluding Mexico will end up with one win and two losses, meaning tiebreakers will decide the runners-up. 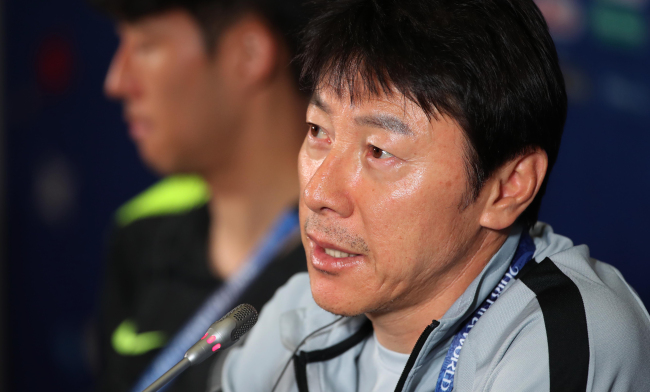 South Korea national football team head coach Shin Tae-yong speaks at a press conference at Kazan Arena in Kazan, Russia, on June 26, 2018, one day ahead of the 2018 FIFA World Cup Group F match between South Korea and Germany. (Yonhap)
"It's not easy because Germany are much more stronger than we are, but the ball is round and we believe we'll have our chances," Shin said at a pre-match press conference in Kazan. "But like Mexico beat Germany, we can also do it. We'll try to play the game for the win."

Shin said the situation in Group F has not gone as he'd thought it would. Shin originally predicted Germany would face South Korea with two wins, but with the world's No. 1 team struggling, he said it is making it more difficult for South Korea because Germany will be a determined squad trying to get their three points.

The situation became worse for South Korea as they will play without their team captain Ki Sung-yueng, who sustained a left calf injury during the match against Mexico. Shin said Ki's injury was also something he couldn't have foreseen.

"My head is really working busily to find solutions for Ki's absence," he said. "As for tomorrow, a player who is mentally stable and can sacrifice for the team will wear the captain's armband."

Shin said South Korea have been analyzing Germany since they have been drawn into the same group. But he admitted that the Germans are the difficult opponents even if South Korea entered the World Cup at full strength.

"We lost almost half of our core players before the World Cup," he said. "We might have improved our teamwork, but even if we compete at full strength as a team, Germany are not easy to beat. However, we're not giving up on that one percent of hope, and we'll give our everything to conclude the tournament with a positive result." (Yonhap)