[ The Korea Herald – Send E-mail ]
[World Cup] In bid to reach knockout stage, S. Korea also trying to make history
By Yonhap
Published : Jun 25, 2018 - 16:13
Updated : Jun 25, 2018 - 16:13
Even after losing their first two matches at the FIFA World Cup in Russia, South Korea are somehow still alive in the tournament, with a chance to book a knockout spot by beating Germany in its Group F finale.

In Group F, Mexico are the leaders with six points, and Germany and Sweden each have three points, followed by South Korea with zero.

But if South Korea beat Germany by at least two goals and Mexico defeat Sweden on Wednesday -- when both matches will be held simultaneously -- then South Korea will finish second in the group on a goal difference tiebreak edge over the two European foes.

Trying to topple Germany, the defending champions, will be difficult enough for South Korea. But what are the odds of a team advancing to the round of 16 at a World Cup after dropping the first two group games?

Since the World Cup expanded to 32 nations in 1998, it has never happened before. 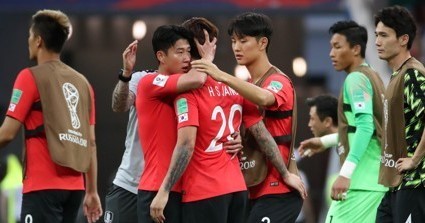 South Korean players console each other after losing to Mexico 2-1 in the teams' Group F match at the FIFA World Cup in Russia at Rostov Arena in Rostov-on-Don on June 23, 2018. (Yonhap)
At this year's tournament, South Korea are among nine teams to have lost their first two matches. And eight of them have been eliminated.

Given the way South Korea have performed -- losing to Sweden 1-0 and then to Mexico 2-1 in thoroughly uninspiring performances -- it doesn't appear likely that the drought will end this year.

And since the 1998 World Cup, only one nation, Chile in 1998, has ever reached the knockout stage with three points. At the five previous World Cups, the 22 other countries that earned three points in group play all went home early.

In that tournament, Chile had three draws to finish second behind Italy, which had two wins and a draw. Austria and Cameroon each had two draws and a loss.

And quite often, collecting four points hasn't been enough to send teams through to the round of 16.

Since 1998, 29 countries picked up four points in the group stage, and 14 of them couldn't get past the opening phase.

South Korea had four points from one win, one draw and one loss at the 2006 World Cup in Germany, and still finished in third place behind Switzerland (seven) and France (five). (Yonhap)