[ The Korea Herald – Send E-mail ]
[From the Scene] Yemeni asylum seekers in Jeju hope to reduce prejudices
Unprecedented influx of Yemeni asylum seekers in Jeju sparks public discussion on refugees
By Jo He-rim
Published : Jun 25, 2018 - 16:28
Updated : Jun 26, 2018 - 10:02
JEJU -- When the in-flight announcement said that the plane was landing on South Korea’s Jeju Island, Hane felt a sense of relief for the first time since he fled his warring home country, Yemen, in May 2016.

Hane, who was formerly a journalist with Yemen’s biggest daily, was subjected to excruciating torture and narrowly escaped death before fleeing to Egypt, and then to Malaysia and finally to Jeju. 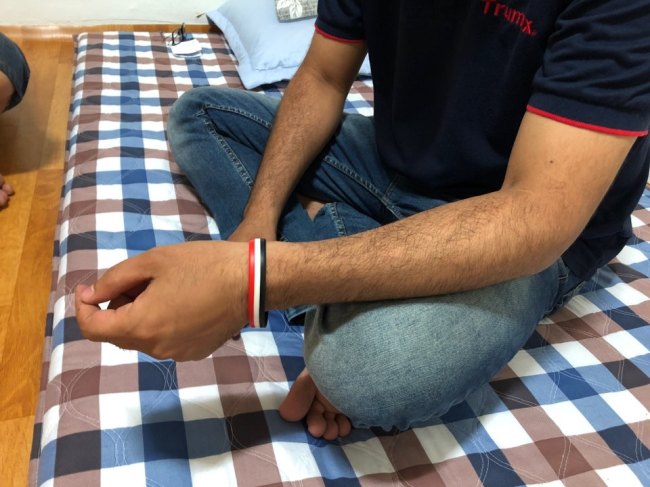 Hane, formerly a journalist in Yemen, wears a rubber bracelet of his country’s flag. (Jo He-rim/The Korea Herald)
The sensation of a gun pressed against his head is still sharp, as if it happened yesterday, he said. His last wish, he says, was to be shot, not beheaded.

As he took his first steps into Jeju International Airport, he knew his life would not be in danger because it was “normal” to be safe here in South Korea. But at the same time, he was at a loss.

“I am a man who has lost his homeland,” Hane told The Korea Herald on Wednesday, at a house he has been staying in with 16 other Yemeni men.

The house was rented by Canadians who left Jeju before the lease was up and gave them the use of the house until the lease ends. Hane sat there, wearing a rubber bracelet striped with the colors of Yemen’s flag -- red, white and black.

“We carry our country (inside our minds) to wherever we go,” Hane said.

Muneer Almammari, also a former journalist who arrived in Jeju on May 5, said they were grateful for how Korea had legally allowed them to stay, and for the people who willingly helped them.

“I understand that it must be a surprise for Koreans to see so many asylum seekers from one country to come. So I wish for the media to play the role to get rid of the prejudices that exist against us,” he said.

Hane and Almammari are among the 561 Yemeni asylum seekers who arrived in Jeju this year in May to escape the bitter civil war in Yemen that has been on-going since the end of 2014. 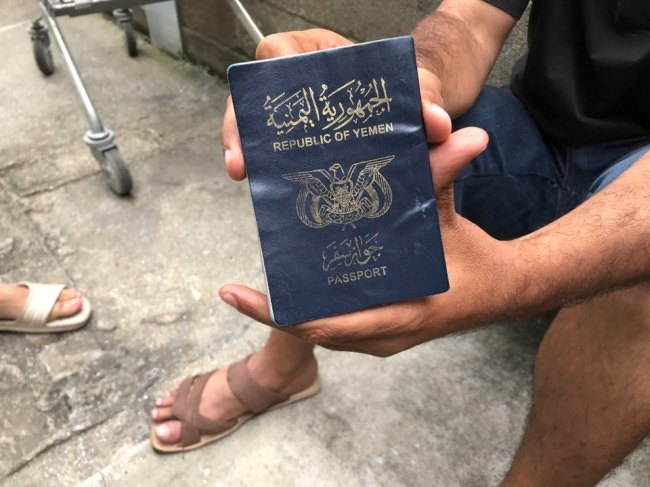 Jeju is a self-governing provincial island located in the south of Korea. But in recent months, it became a hopeful destination for Yemeni asylum seekers due to its visa waiver program. As part of its measures to boost tourism, the province allows foreigners to stay for 30 days without a visa -- with the exception of nationals from countries such as Afghanistan and Syria, for security reasons.

According to Gamdan, a 36-year-old asylum seeker who arrived in Jeju on May 11, Yemenis only have a limited number of countries that grant them visas for temporary stays. After a dangerous journey to get out of Yemen, the asylum seekers can only take flights to other countries via Jordan, Egypt or Sudan. As for Yemenis in Jeju, most of them came over from Malaysia as the Southeast Asian nation allows entry for the first three months without a visa, he said.

While approximately 20,000 Yemenis are reportedly staying in Malaysia, the country has not signed the 1951 UN Refugee Convention and does not provide any legal protections or support for refugees. It is also illegal for them to work without the right visa.

When the low-cost carrier AirAsia opened a direct flight from Kuala Lumpur to Jeju City in December 2017, it came as a ray of hope for the Yemenis that are constantly under the threat of deportation.

South Korea is a signatory to the 1951 UN Refugee Convention and is the first country in Asia to establish and enact its own Refugee Act in 2013. Most of the 561 Yemenis in Jeju applied for refugee status following their entrance to the city. 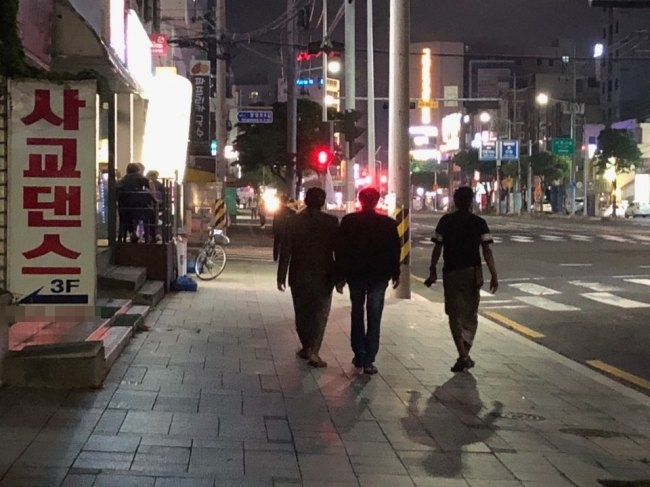 The sudden and unprecedented influx of Yemenis has sparked a public dispute in South Korea.

An online petition on the presidential Blue House website was posted on June 13 to demand the government revise the law on refugees and the visa waiver program for Jeju to stop further entrance of Yemeni asylum seekers. More than 401,400 people have signed the petition, as of Monday noon.

“I do not like how the Yemenis entered the island. I am worried about our safety, and also worried that they will take our jobs,” Park, 23, told The Korea Herald on a district in Jeju City on Thursday.

A recent local poll showed that South Koreans are divided on the issue of refugees. According to a Realmeter poll on Thursday, 49.1 percent of 500 respondents across the country expressed opposition to accepting Yemeni asylum seekers. Only 39 percent supported the idea.

Opponents claim for the rights of Korean nationals and reject the idea of using tax money to support the refugees, while rumors about refugees and Muslims also raised fear among the public. In an online community of mothers in Jeju, numerous posts were shared on how nationals from the Middle East are trying to “Islamize” other countries by moving there. Other online users also expressed concerns of a rise in sexual or child-related crimes, viewing Yemenis as potential criminals or terrorists.

The South Korean government has always been relatively closed about refugees, even though it is a signatory to the UN convention. The country began receiving applications for refugee status in 1994, but only 4.1 percent were approved, Ministry of Justice figures show. In other words, among 20,361 cases that had completed review, only 839 people were granted refugee status to receive state support. The average acceptance rate of other member states is 38 percent.

There have been a series of outdoor protests against the Yemeni asylum seekers in Jeju. An online blog has been created to plan and advertise a rally expected to take place at Gwanghwamun Square in central Seoul on Saturday. The post garnered over thousands of replies, and many appear to be in support of the movement.

“South Korea’s refugee support system seems to have been exaggerated. There is not much the government offers for refugee applicants, and even the small allowance of 400,000 won that is said to be given to them is often rejected,” Chung Sin-young, a lawyer from the non-profit organization Advocates for Public Interest Law told The Korea Herald.

“A lot of energy is consumed in aggravating the reputation of Muslims, but no efforts are made to correct the prejudices,” she added.

Experts also explain the crime rates of foreigners mark far below that of Korean nationals. According to a report by Korean Institute of Criminology released last year, the number of foreigners arrested in 2011 was 1,591 per 100,000 people while the same figure stood at 3,524 per 100,000 people for Korean nationals. As for the Yemenis, no criminal reports have been made in Jeju.

“The Korean government is very picky about accepting refugees. Even those who receive humanitarian stay permits have to report their whereabouts every six months. Every time they get a job or move residence, they are mandated to report that too,” Shin Kang-hyup, the chief of Jeju Peace & Human Rights Institute WHAT told The Korea Herald.

“If these asylum seekers commit crimes, they should be lawfully punished. But people should understand that when they do so and are deported, they will have basically lost their lives,” Shin added. 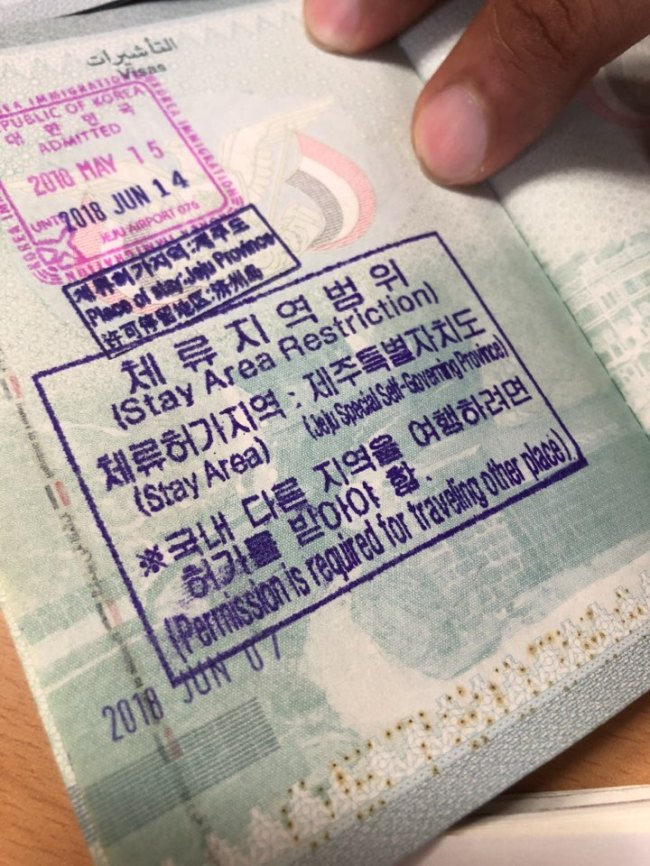 The Yemenis are currently “stranded” in Jeju. On April 30, the Justice Ministry blocked the Yemenis from leaving the island by putting area restrictions to the G-1 visas granted to Yemenis who applied for refugee status. Then it also added Yemen in the list of 11 countries to require its nationals to have official visas to enter the country on June 1 -- practically prohibiting entrance to any more Yemenis.

One of the biggest concerns for the asylum seekers is accommodation. The situation differs for individuals, but many face financial struggles when they arrive, and some have also been spotted setting up tents in parks, because they ran out of money to pay for a hotel.

“Before I came here from Malaysia, I was informed that I would need money to spend for two to three weeks in Jeju until I receive the visa to go to Seoul,” Mohammed Alghaodari, 34, told The Korea Herald. The father of an eight-month old boy had come to Jeju with his wife and child on May 15.

Alghaodari, who was an airport employee in Yemen, left the country in search for safety and landed in Malaysia. In the Muslim country, he tried to find a way for his family to stay, but could not and started working at a restaurant. There, he was “exploited,” working over 16 hours a day including weekends.

“I paid to extend my permit. But everything I would do there would be illegal, and there was no protection or medical support for us. With my new boy, I found it extremely hard to support my family there.”

Then he heard about Jeju and the refugee center located in Seoul. He said he saved and borrowed money to make a budget of $2,000, including the airfare for three, and the hotels -- only to see it run out in the three weeks. His family is now staying at an apartment with a Korean couple.

Bassam Alotab was also worried about where he would stay as his hotel reservation dates drew close to the end when The Korea Herald interviewed him on Thursday.

As part of measures to deal with the situation in Jeju, the presidential office made the exception to give work permits to the Yemenis, and also said it will provide medical aid and food.

Two job introduction sessions had been arranged in aquaculture and restaurant works, but it was not enough, Alotab said.

“Many of them also came back after working for a couple of days in the fishery industry, because the work was too difficult.” 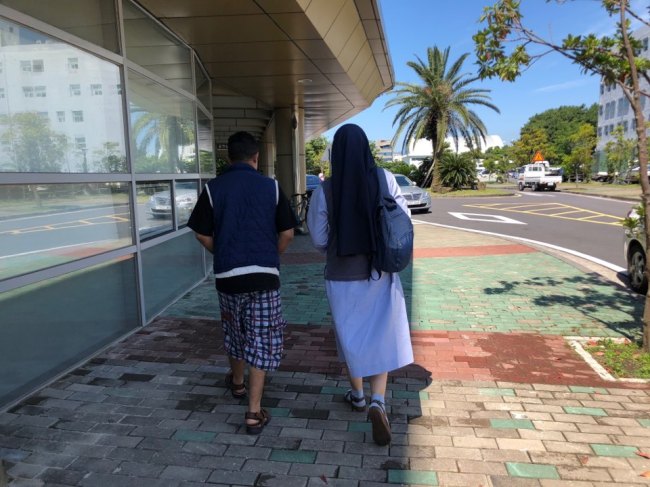 Sister Cristina takes a Yemeni asylum seeker to a hospital in Seogwipo City, Jeju, Thursday. (Jo He-rim/The Korea Herald)
Providing medical support for the Yemenis is also a difficult task, Sister Cristina Gal told The Korea Herald. The Naomi Migrant Pastoral Center of Joongang Cathedral of the Jeju Diocese is one of the organizations that are providing medical aid to the asylum seekers along with other human rights groups.

On Thursday, Sister Cristina had to drive an hour from Jeju City to Seogwipo City across the island to get a Yemeni treated for urolithiasis because all other medical centers in Jeju City refused.

“There are only a couple of hospitals that would treat the asylum seekers here free of charge,” she said. Throughout the day, she had taken seven Yemenis to the hospital.

The Romanian nun pointed out how Korea’s medical law requiring approval of a guardian for everything has become an obstacle for the Yemenis to be treated.

She explained about the emergency situation the day before when a 26-year-old Yemeni suffered an anxiety attack. He had refused to do everything, did not eat nor go to the toilet for almost a week. When she took him to the university hospital in the city, he was in a dire situation, she said. But after the hospital officials found out that he was with his uncle and not his parents, they refused to treat him, she said.

The patient was moved to another hospital to be rejected again, and then was transferred to Naju, South Jeolla Province after the Jeju immigration office made a special order.

“There could be all kinds of emergency situations with the Yemenis. Most of them are solo men, and if such a situation occurs, they would not get the medical support because they do not have a guardian,” she said.

On Sunday, Jeju Self-Governing Province Gov. Won Hee-ryong also said he will do his best to provide a solution to the crisis. But he also called for the central government to come up with proper measures to deal with the asylum seekers.