South Korea football coach Shin Tae-yong said Sunday his side will give their all-out efforts to collect a win over Germany at the 2018 FIFA World Cup, although it's not going to be an easy mission.

South Korea are last in Group F with two losses, but if they beat Germany and Sweden lose to Mexico, the Taeguk Warriors may advance to the round of 16 with Mexico. Germany and Sweden both have one win and one loss apiece, while Mexico are the leaders with two wins.

Although chances are slim, Shin said they will go for their chances.

"We have to know why Germany are the No. 1 team in the FIFA rankings," Shin told reporters during training at Spartak Stadium in Lomonosov, a suburb of Saint Petersburg, Russia. "Like a drowning man will clutch at a straw, we'll do our best to prepare for the match." 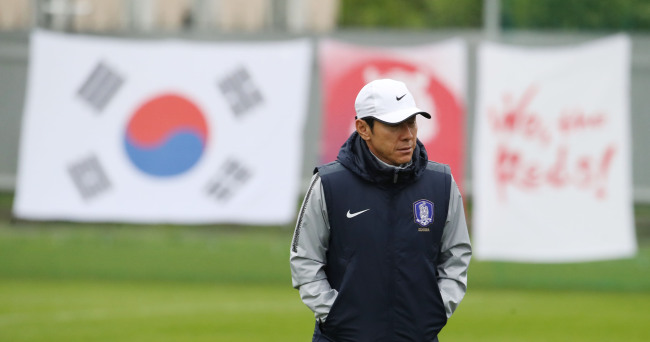 South Korea national football team head coach Shin Tae-yong watches his team's training at Spartak Stadium in Lomonosov, a suburb of Saint Petersburg, Russia, on June 24, 2018, three days ahead of the 2018 FIFA World Cup Group F match between South Korea and Germany. (Yonhap)
South Korea flew to their base camp in St. Petersburg hours after they lost to Mexico 2-1 at Rostov Arena in Rostov-on-Don on Saturday. The coach said he watched the Germany-Sweden match while heading to the airport.

If the Germans had collected a draw or suffered a loss to Sweden on Saturday, South Korea would have been eliminated from knockout stage contention, but Toni Kroos' second-half stoppage goal kept their hopes alive.

Shin said he believes the players will do their jobs right against Germany, although he lamented that the team's captain Ki Sung-yueng is out for the match. Ki suffered a left calf injury during the match against Mexico and will not be available for South Korea's duel against Germany.

“As a captain, Ki did his job 100 percent and was a mentor for the players," he said. "I believe other players will fill the void left by Ki and Park Joo-ho in the next match."

Shin, meanwhile, expressed his regret on the process of Mexico's second goal. Ki was fouled by Mexico's Hector Herrera, but the referee didn't make a call, which later led to Javier Hernandez's goal on a counterattack.

"I watched the play, and it's 100 percent a foul," he said. "I feel somewhat sad that the VAR (video assistant referee) system wasn't used. The players couldn't really demand the referee use VAR because the referee told the players not to appeal about VAR use."

Earlier in the day, the Korea Football Association said it will send a letter to FIFA to express its regret over refereeing in the match regarding Herrera's foul on Ki before Mexico scored their second goal. (Yonhap)