[ The Korea Herald – Send E-mail ]
[World Cup] After painful defeat to Mexico, S. Korea conduct post-match training in rain
By Yonhap
Published : Jun 25, 2018 - 10:08
Updated : Jun 25, 2018 - 10:10
SAINT PETERSBURG, Russia -- South Korea conducted a post-match training session in the rain on Sunday as they focused on recovery of the players' fitness ahead of their final group stage match against Germany at the 2018 FIFA World Cup.

South Korea's 23-man squad returned to their base camp in Saint Petersburg hours after they suffered a 2-1 loss to Mexico at Rostov Arena in Rostov-on-Don, Russia, on Saturday. For Sunday's training at Spartak Stadium in Lomonosov, a suburb of Saint Petersburg, South Korea only fielded 11 players who didn't start against Mexico.

To recover their fitness quickly, the starting members in the Mexico match trained at the team hotel, according to a national team official. 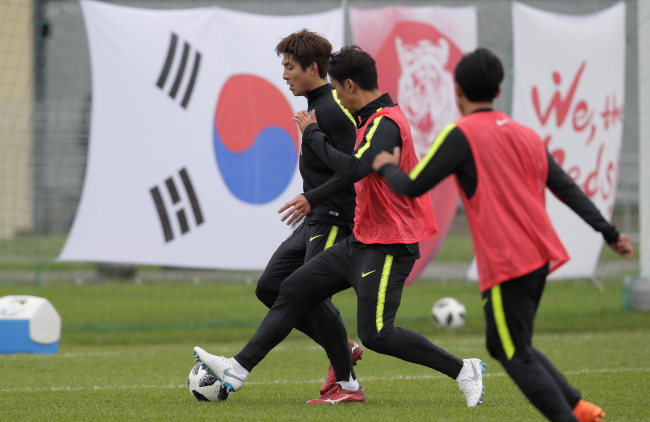 Korea's Oh Ban-suk, left, and Jung Seung-hyun, centre, attend South Korea's official training in Lomonosov near St. Petersburg, Russia, Sunday, June 24, 2018 at the 2018 soccer World Cup. (AP-Yonhap)
South Korea originally planned to have outdoor training with all players, expect for the injured Park Joo-ho, in St. Petersburg, but because of cold weather and rain, the coaching staff decided to protect their best 11.

In an open training that lasted about one hour, South Korean players ran their passing drills and ball control exercises. Lee Seung-woo, Jung Woo-young and Hong Chul, the three players who competed as second-half substitutes against Mexico, also participated in the training.

South Korea are scheduled to face defending champions Germany at Kazan Arena in Kazan on Wednesday. The Taeguk Warriors are currently the worst team in Group F with two losses, but they can still advance to the round of 16.

If South Korea beat Germany and Sweden lose to Mexico, three teams will be all square at one win and two losses, and they will have to count tiebreakers to determine the second place finisher behind Mexico. (Yonhap)