ROSTOV-ON-DON, Russia -- With one mistake after another, South Korean defender Jang Hyun-soo has become a scapegoat for the team's woes at the 2018 FIFA World Cup in Russia.

Jang, a center back who plays with FC Tokyo, gave up a penalty kick in South Korea's 2-1 loss to Mexico on Saturday in their second Group F match at Rostov Arena in Rostov-on-Don, Russia, after committing a handball foul in the box. The 26-year-old tried to stop Andres Guardado's cross, but unfortunately the ball hit his right arm.

And when Mexico moved forward with their counterattack in the 66th, Jang chased Javier Hernandez and went for a tackle to win the ball. But he was rendered helpless on the pitch as the West Ham United striker easily beat him with a fake move and scored to give Mexico a 2-0 lead. 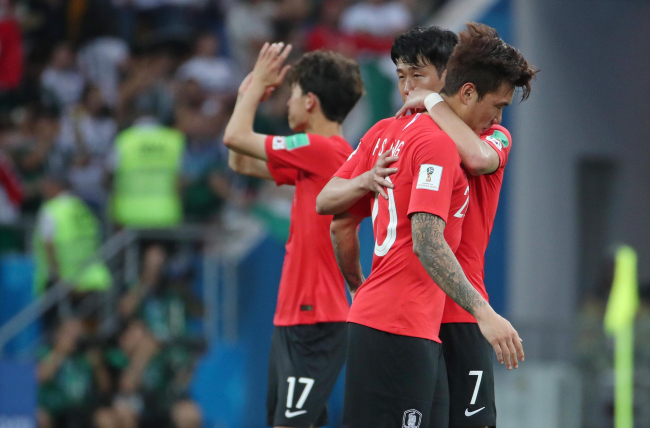 South Korea`s Jang Hyun-soo (2nd from R) is hugged by teammate Son Heung-min after their 2-1 loss against Mexico in the 2018 FIFA World Cup Group F match at Rostov Arena in Rostov-on-Don on June 23. (Yonhap)
Saturday's performance gave some South Korean fans yet another reason to take their frustration out on Jang. In South Korea's 1-0 loss to Sweden in their Group F opener in Nizhny Novgorod, Jang was criticized for his stray pass to left back Park Joo-ho, who ended up with a hamstring injury after trying to control Jang's long ball.

Some fans even pointed out it was Jang who was the starting point for surrendering a penalty kick. Before Kim Min-woo brought down Viktor Claesson in the box, the fans claimed that Jang's header clearance wasn't good enough and forced Kim to chase the ball after Claesson.

After the Sweden match, Jang even had to shut down his social media service account because of negative, critical comments on his page.

Some angry fans even filed an online petition to the presidential office, demanding national team officials axe Jang from the squad. Even some media outlets joined the move in calling Jang the main source of problems in South Korea's recent performances.

Jang, a veteran player with 53 caps, is one of head coach Shin Tae-yong's favorite defenders. Since Shin took the job last July, he has been one of the top three players in minutes played with the national team.

A national team official previously said Jang is trying not to read such negative comments and news reports on himself during the tournament so that he can stay focused. However, with the latest performance, it appears that he is likely to remain the talk of the town in the South Korean football community for quite a long time.

After the match, Son Heung-min defended his beleaguered teammate, saying it's not going to help the team if so many fingers are pointed at just one player.

"Everyone works hard to play well, and you can concede a goal even if you do well," he said. "For the second goal, I just think that player (Hernandez) played well. I just feel sorry for Jang because what he did was just trying to stop the opponent. I will try to help him recover his mental strength." (Yonhap)