According to the Supreme Court on Monday, two cases of conscientious objectors, which two panels of its judges have been reviewing, have been transferred to an “en banc session,” in which all justices of the top court participate in the cases. It has also scheduled a public hearing for the cases on Aug. 30. 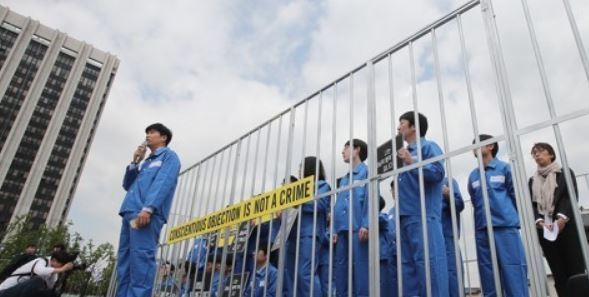 (Yonhap)
All able-bodied South Korean men are required to serve in the military for about two years, and only those with “justifiable grounds” are exempted, according to the Military Service Act.

In the past, religious and conscientious reasons behind refusing mandatory military service were not accepted as “justifiable” by the judiciary, and conscientious objectors -- many of whom were Jehovah’s Witnesses -- were subject to prison terms of less than three years, according to the law.

It was in May 2004 that the first acquittal was made for a conscientious objector, by the Seoul Southern District Court. But two months later, the Supreme Court opened an en banc session and ruled that freedom of conscience cannot take priority over military service. The accused was sentenced to 1 1/2 years in prison.

Since then, despite the top court’s final decision on the case, 89 cases of conscience objectors have been acquitted by lower courts, with 28 of them occurring this year.

For the upcoming public hearing in August, all 14 of the top court’s justices will participate, with Chief Justice Kim Meong-su leading. The two convicts are Jehovah’s Witnesses who have been sentenced to both prison terms and monetary penalties by lower courts. One person reportedly refused to serve his military service after receiving a notice of enlistment in 2013, and the other has turned to the religion after he finished his mandatory military service and refused to take part in the reserve forces training that is required of those who have completed their duty.

Since 2013, nearly 2,500 people were prosecuted for failing to enlist in the military, according to data from the Military Manpower Administration.