Seoul mayoral candidate Shin Ji-ye of the Green Party Korea, which is an extra-parliamentary party, came fourth in the run against major negotiating blocs, winning an unexpected 82,874 votes, or 1.7 percent of total ballots cast. She even placed ahead of Kim Jong-min from the far-left opposition Justice Party, which holds six parliamentary seats. 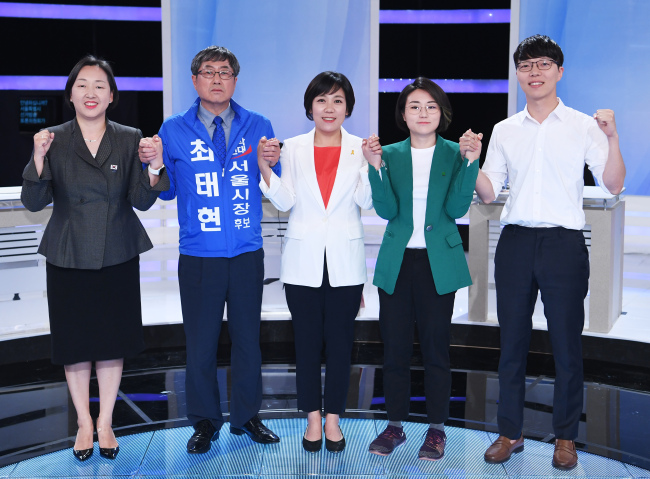 Seoul mayoral candidates from small parties hold hands in a televised debate hosted by the National Election Commission on June 4. From left: In Ji-yeon of the Korea Patriots Party, Choi Tae-hyun of the New Politics Party, Kim Jin-sook of the Minjung Party, Shin Ji-ye of the Green Party Korea and Woo In-cheol of Our Future Party. (Yonhap)
The small non-parliamentary party’s progress did not end there. Ko Eun-young, who was the youngest candidate to run for the Jeju Self-Governing Province governor post on the Green Party Korea ticket emerged ahead of candidates from the main opposition Liberty Korea Party and center-right minor opposition Bareunmirae Party. The 32-year-old candidate ranked third, garnering 12,188 votes, which account for 3.53 percent of total ballots.

The Green Party of Korea, which was established in March 2012, is one of several minor political groups that competed in the local and gubernatorial elections. While the media mostly covered candidates from the four political parties that hold parliamentary seats, there were 18 parties that had registered their candidates to run in this year’s elections, according to the National Election Commission.

The small political groups all have relatively detailed policies that are focused on a few social issues. The Green Party of Korea, which had 32 candidates running in the local elections, advocates minority rights, including the rights of women, homosexuals and immigrants. Our Future Party, which fielded six candidates, including Woo In-cheol who ran for Seoul mayor, promotes social values and the rights of youths.

Such minor parties also include parties that have derived or defected from the major parties, to focus on a single issue. The New Politics Party, a far-right conservative party, was established to support impeached former President Park Geun-hye, and the Korea Party that has over 5,000 members also presented its conservative reunification policies.

Often these parties face difficulties as they lack the financial and organizational power base. They say the election law must first be revised in order for them to effectively approach voters, because they are left out in many legal aspects, for example, in election campaign expenses.

Previously, the small parties’ very existence was under threat due to the law, which stipulated that a party that fails to obtain at least 2 percent of the votes in any national election is automatically dissolved.

Three political groups, including the Green Party and Labor Party of Korea came together and filed a complaint against the article in the law. On Jan. 28, 2014, the Constitutional Court ruled the law unconstitutional, allowing the parties to remain.

“The cancellation of a party’s registration deprives the party’s existential cause, making it impossible for the party to undertake activities as a political party, and therefore violates the constitution,” the justices had said at the time of the ruling.

The National Election Commission distributed 45.8 billion won in election campaign expenses to the seven political parties that hold at least one seat at the National Assembly. According to the election watchdog, the amount was derived by multiplying 1,011 won by the total number of voters.

The parties were also given additional subsidies if they nominated women or those with disabilities as candidates. The ruling Democratic Party received 13.5 billion won while the main opposition Liberty Korea Party obtained 13.7 billion won.

Individual candidates who garner at least 15 percent of total votes get their entire campaign spending covered, while half the spending is subsidized if they obtain 10 to 15 percent of votes.

But such support is unlikely for small parties like the Green Party, Korea Party and Our Future Party, and they did not receive any money from the NEC in the recent elections.

“The big parties do not have much financial troubles but they run political campaigns while receiving financial support. For us, it is a burden to hire even the minimum number of campaigners,” said Ryu Seung-koo, chairman of the Korea Party.

The election law creates hurdles for minor parties in promoting their candidates, as well. Since 2004, candidates are banned from hosting private meetings and discussions with supporters, other than participating in registered televised discussions and official candidate debates hosted by civic groups. The change was made at the time because of frequent bribing of supporters at such meetings.

“Big parties often use canvassing trucks with loudspeakers to reach out to voters on streets. But for small parties like us, not only are the trucks not affordable, we also try to refrain from that method (for its noise-causing problems),” Ha said. “We often use bicycles, and it was difficult to meet many voters. It would be much more convenient for small parties if supporters meetings were allowed.”

As for this year’s high support rating, Ha from the Green Party explained that the strength of a minor party comes from its strong identity.

“We have always promoted policy-driven politics, and I think the feats of the candidates shown in this election were mainly achieved with each candidate’s strong identity in promoting the party’s values,” Ha said.

As for Shin, while the #MeToo movement spread widely, no other candidates touched on the issue, and Shin had the advantage, Ha said.

Ryu of the Korea Party said the party continues to exist because it provides diversity in the Korean political arena.

“Not only do we represent different voices of society, but we also provide detailed policies because we focus on a couple of issues. Other major political parties will observe them and change their policy directions for sure,” Ryu said.