South Korea's Ryu So-yeon has claimed her sixth career LPGA title and her first of the season.

Ryu won the Meijer LPGA Classic for Simply Give by two strokes over Caroline Masson at Blythefield Country Club in Grand Rapids, Michigan, on Sunday (local time). Ryu fired a five-under 67 in the final round for the four-day total of 21-under 267.

Ryu is the fifth South Korean champion on the tour this year in 16 tournaments. Ryu made $300,000 with the victory and reached $576,600 in earnings for the season.

The world No. 6 started the day at 16-under, two strokes behind co-leaders, Lee-Anne Pace and Anna Nordqvist. The three played together in the final group. 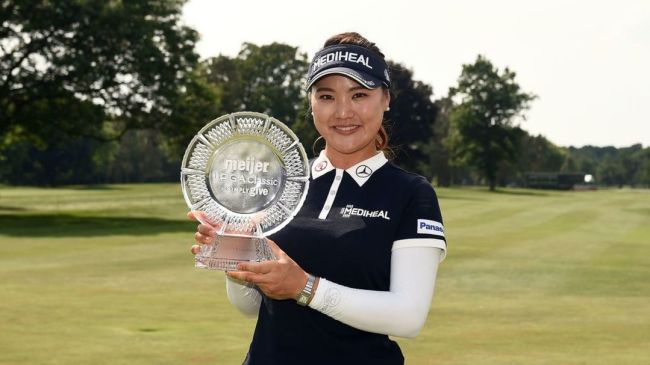 Ryu So-yeon of South Korea holds the champion`s trophy after winning the Meijer LPGA Classic for Simply Give at Blythefield Country Club in Grand Rapids, Michigan, on Sunday. (AFP)
Ryu birdied two of the first three holes to pull in to a tie with Pace at the top, while Nordqvist committed a bogey at the second hole to drop out of the lead. Ryu had another birdie at the seventh and was at 19-under at the turn.

The South Korean birdied the 16th and 17th to take a two-shot lead, and closed out her victory with a par at the 18th.

"Actually, I was incredibly calm today. So when I felt that, I was like, 'maybe it could be my day,'" Ryu said. "My putting turned out to be really great and then I was nervous but at the same time I was able to focus on my game, focus on my shot instead of thinking about other players. I'm really proud of myself today."

Nordqvist got to within one stroke of Ryu at 19-under with birdies at the 15th and 16th, but a disastrous double bogey on the 17th sealed her fate.

Nordqvist missed her tee shot on that par-4 hole to right, and missed the green long with her second shot, which landed in a bunker. Nordqvist again missed the green from the sand, and after finally reaching the short grass in four, Nordqvist two-putted for a double bogey that brought her down to 17-under.

Ryu made a birdie on the same hole to move to 21-under.

This was only Ryu's third top-10 finish in 12th start this year. Her previous best was a fourth-place showing at Hugel-JTBC LA Open in April.

The six career LPGA wins put Ryu in a tie with Han Hee-won, Grace Park and Kim Sei-young for seventh most all-time among South Korean golfers.

On the strength of two wins, including her second career major title at ANA Inspiration, Ryu shared the 2017 LPGA Player of the Year honors with fellow South Korean Park Sung-hyun. Ryu stayed at the top of the world rankings from June 26 to Oct. 30 last year. (Yonhap)