The ruling Democratic Party of Korea garnered sweeping victories in most regions, winning 14 out of the 17 mayoral and gubernatorial posts. The Liberty Korea Party only managed to grab two posts, in the conservative strongholds Daegu and North Gyeongsang Province. In the by-elections, the ruling party won 11 of 12 parliamentary seats. 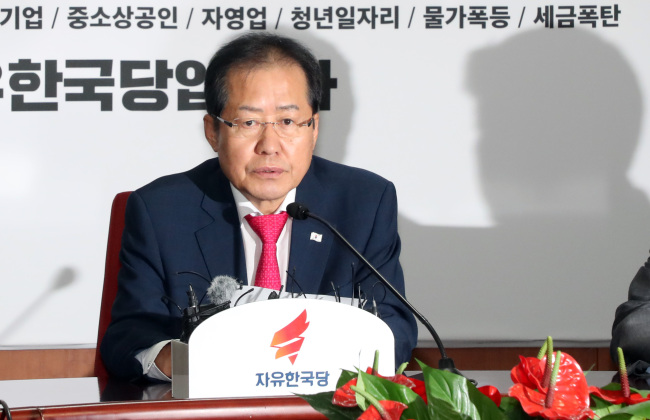 Hong Joon-pyo, the chairman of the main opposition Liberty Korea Party announces his resignation at a party meeting on Thursday. (Yonhap)
“We completely failed and the entire country has been passed (to the ruling party). Everything is my fault and every liability lies with me,” Hong said at a party meeting Thursday. “I respect the decision of the voters. I will step down from my chairman position today.”

Rep. Yoo of the Bareunmirae Party also said that he accepts the results of the elections.

“I put my best effort to sow the seeds for new, reformed conservative politics. But I believe my work fell short of the people’s expectations. I will take some time to re-examine ourselves and continue to strive to revive the collapsed conservatives,” Yoo said. His party, which was established by defectors from the Liberty Korea Party, failed to take even one seat among all the contested seats.

Regarding Wednesday’s results, experts said it was a total loss for conservatives in the country, adding that if they do not come up with sincere measures, the damage may be “irreparable.”

One of the biggest reasons behind the failure, they said, was that the conservative party was perceived as an “interest group” rather than a political representative of the people.

“Regardless of the agenda, the conservative party strongly clashed with the ruling party and the government, and the series of events highlighted the party’s reputation as an interest group, not a political representative of the people,” Shin Yul, a political science professor at Myongji University, told The Korea Herald.

Since President Moon Jae-in took office in May 2017, the main opposition party has been opposing government plans, from its appointment of the Cabinet and the government’s drive to amend the Constitution this year, to the efforts to engage North Korea, which have been generally hailed as a remarkable feat by the public.

While it may be the role of opposition parties to keep the government in check, the party’s hard-line stance ran against the general public sentiment, and that attitude gave people the impression that it was opposing the government for the sake of opposition, Shin explained.

The powerful conservative block was first fractured when a corruption scandal involving conservative President Park Geun-hye ended with her removal from office in March last year.

The impeachment of Park was not traumatic enough to actually change the political ideologies of the people, Shin said. How the Liberty Korea Party dealt with the situation subsequently turned so-called “shy conservative” voters -- who would not publicly reveal their political stances -- to “angry conservatives” who refused to vote for the failed political faction, he explained.

“It is the end of the conservative party. For a revival, they should choose to ‘die’ and start everything from the beginning. Resignation of the leadership and rebranding the name of the party will not save them,” Shin said. “I think the party should dissolve and all the lawmakers should stay as independents.”

The scenario may sound extreme, but how the liberals swept the elections is also unprecedented, and therefore such exceptional measures will be the only way for a real breakthrough for the conservatives, he added.

“The conservatives earned their authority from the old dictatorship government a long time ago. The voters’ decision on Wednesday is the judgment against the conservatives for thinking that just a few at the top could teach and enlighten the people,” Jun said.

As for ways for the Liberty Korea Party to be revived, experts say that strategic political moves are not solutions.

“The Liberty Korea Party should come up with a new policy frame that can compete with the Moon administration’s big policies, especially in North Korea policies,” said Yoon Pyeong-joong, a professor of political philosophy at Hanshin University.

“The conservative party still claims that South Korea should absorb the North in unification. It is just too difficult for them to admit the North as another state. But it is not the Cold War era anymore, and they have to now read the trends,” Yoon said. “As conservatives, they should bring policies that fit the reality and persuade the people.”