A scent can be described as the last garment to complete one’s ensemble -- with Korea no exception to the trend.

Among a slew of perfumes displayed at department stores, however, Korean brands rarely make the list. French and other European fragrances dominate the market with the iconic Chanel, Dior, Nina Ricci, Yves Saint Laurent and Lancome as the leading players.

The products of Korean perfume houses, such as Perfumelifer, Edenique, Better Than Alcohol and Soohyang, can be found online or at independent shops. 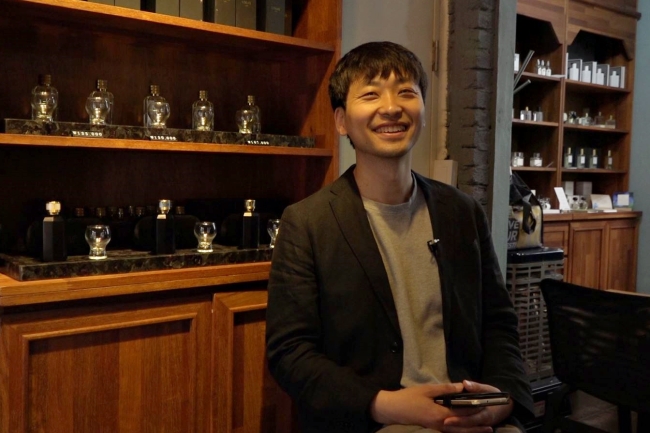 Lee Sung-min, who runs Salon du Parfumeur, told The Korea Herald that providing “solace” is his philosophy for perfume-making. He launched his own perfume brand, Perfumelifer, in 2007.

“I found comfort from fragrances when I was down. When I was depressed, I would purchase small perfumes to cheer myself up,” Lee said, adding that he wants to re-create the experience for everyone who purchases his scents. 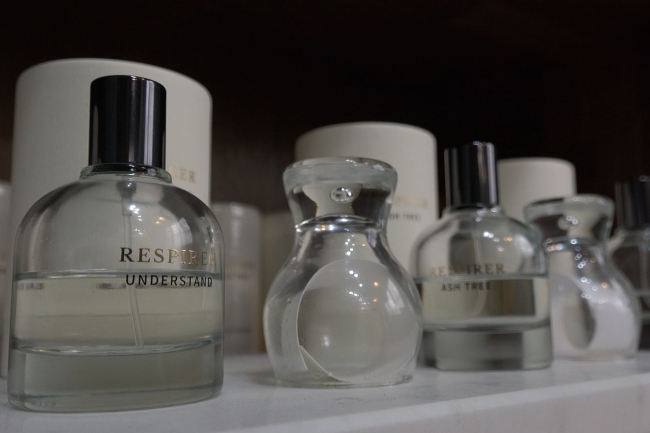 Perfumes from Respirer, in Salon du Parfumeur (Park Ju-young/The Korea Herald)
Creating his own perfume was no easy task. Having no background in chemistry or perfumery, Lee searched for a learning opportunity at fragrance companies, but they had not established adequate training programs 11 years ago.

His applications for a job at companies dealing with aromas similarly were met with negative feedback. Studying abroad was not an option due to financial reasons. The scarce resources to pursue the profession left him all on his own.

Nevertheless, Lee was too committed to perfumery to give up on his dream. He first studied basic perfumery and chemistry from books, then emailed perfume makers overseas and explained his situation in hopes to receive aroma chemicals and formulas. Luckily, he found support for his passion, helping him to experiment with their aroma chemicals to create specific notes laid out in the formulas. He spent months in an isolated room to come up with some formulas of his own. 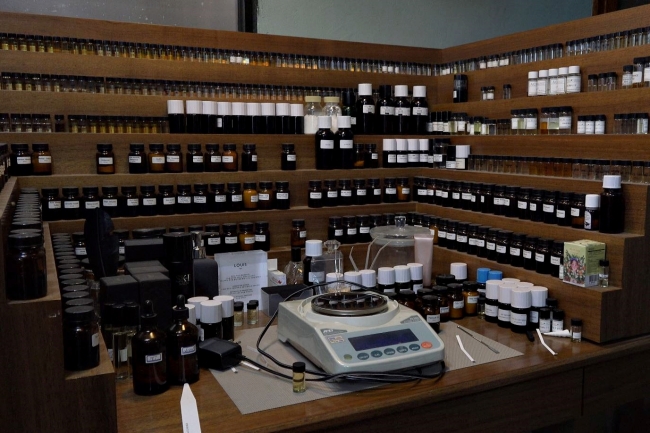 Aroma chemicals for developing perfumes at Salon du Parfumeur (Park Ju-young/The Korea Herald)
When Lee emerged, he took full advantage of his past experiences as an account executive for an advertising firm to make a splash in his debut. He seized on chances to work with different organizations, including the Ministry of Unification, to promote his works.

Lee attributed his success to the novelty of a private perfumery at the time. He was frequently exposed to the media as a pioneer of private perfumeries in Korea. New types of intricately customized and oriental fragrances lured some mainstream consumers away from foreign brands.

Lee now has a handful of apprentices who have launched their own brands. Perfumeries have become much more accessible due to the growing interest in cosmetics in Korea. Private workshops offer simple classes for newcomers, and those who are more serious about it can enroll in academies for more formal training programs.


However, Lee said the infrastructure for perfumeries still has room for improvement. Perfume-related materials such as carriers and pumps are not only difficult to find in Korea, but they are rarely available in quantities suitable for small businesses. Moreover, not too many retail outlets are willing to display and sell Korean perfumes, skeptical of their marketability.

Lee said that it is his and other first-generation perfumers’ duty to pave the way for the next generation.

At the heart of Lee’s expertise is the idea that perfumery should be deemed as a form of art. “Just like how some people find comfort and solace from music, works of art and movies, perfumes provided the very experience for me through different odors.”

Lee said he is seeking to introduce scents that are pleasant but overlooked by those who are accustomed to big-name fragrances.

Among a handfuls of his works, Lee chose Star Overhead as the most memorable.

When he was explaining the constellations in the stars to his daughter on a mountain near his home, his daughter asked him which star belonged to her. He suddenly realized that we too had our own stars from a young age, but forgot about them with the passage of time.

Star Overhead was designed so that his daughter would always remember the odor of the wind, dirt and trees at the site, and never forget her star. More importantly, Lee wanted his daughter to grasp her dreams through the scent. 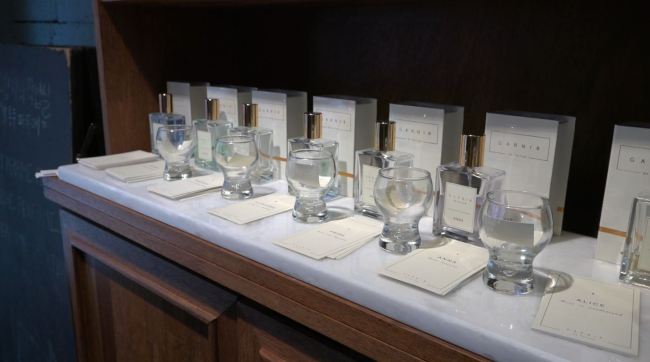 Perfumes from Garnir, in Salon du Parfumeur (Park Ju-young/The Korea Herald)
Life can be more enjoyable if people pay closer attention to fragrances, Lee said. This way, people can appreciate small but valuable details around us that were formerly dismissed.

Lee’s underlying aim is to design every piece of his work as a shortcut to those delightful yet hidden stories in life. 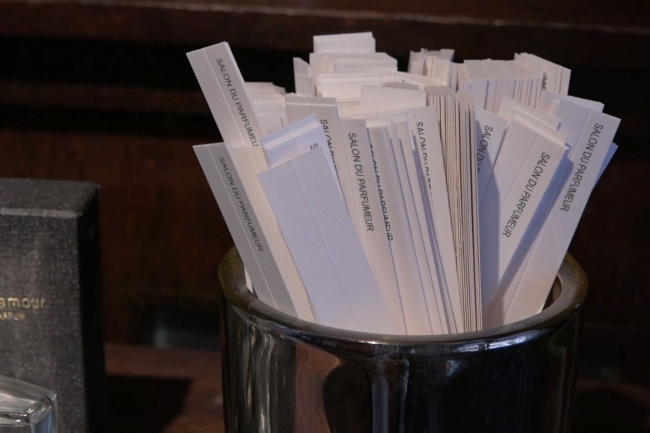 Fragrance test strips at Salon du Parfumeur (Park Ju-young/The Korea Herald)
As for the local perfumery market, Lee said the number of private workshops has been increasing in recent years. Lee remains also optimistic about exporting Korean fragrances overseas, amid growing interest in Korean culture. According to the latest report from the Brussels office of the Korea International Trade Association, Korea has become the fifth-biggest cosmetics exporter to Europe.

“Thanks to K-pop and K-beauty, foreign consumers can easily engage with Korean culture and products, and that is a plus for independent perfumers,” Lee said.