An fell to Bryson DeChambeau on the second playoff hole at the Memorial Tournament at Muirfield Village Golf Club in Dublin, Ohio, on Sunday (local time). An, the 2015 European Tour Rookie of the Year, was chasing his first PGA victory.

An had also lost in a playoff at the 2016 Zurich Classic.

An, DeChambeau and Kyle Stanley ended regulation tied at 15-under 273. When the three went back to the par-3 18th, Stanley was the first to blink, committing a bogey, while the two others had pars.

An and DeChambeau returned to the 18th hole. And this time, DeChambeau -- who'd three-putted for a bogey there in regulation to fall into the playoff -- put his approach to within 12 feet and sank the putt for the clinching birdie. An settled for par. 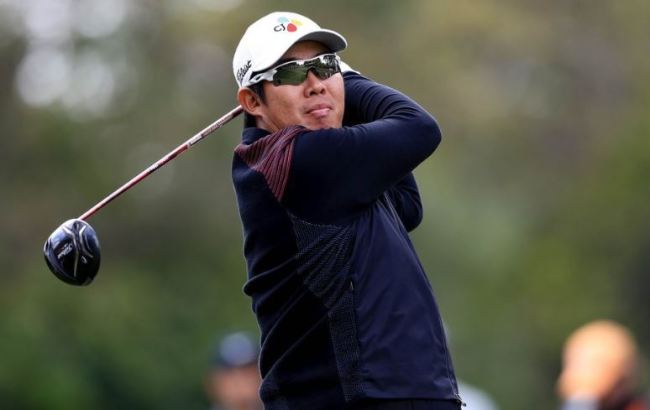 An Byeong-hun (AP-Yonhap)
An, 26, began the day in fifth place at 12-under, two behind the overnight leader, DeChambeau. The South Korean opened the final round with a bogey, and another bogey at the par-3 fourth dropped An to seventh place.

But then he picked up three birdies over his next four holes and then found himself just two back of DeChambeau with three to play.

An made birdie at the par-4 17th to get to within one and watched both DeChambeau and Stanley make bogey at the 18th in the final group to create a three-way tie.

An missed the green on the first extra hole but hit a fine chip to save par. On another try at the 18th, An pulled his second shot into the gallery and scrambled for par after a flop shot that landed a few feet from the cup.

With An certain to make par, DeChambeau ended the playoff with his birdie putt.

Despite the close call, An said he is taking plenty of positives from Muirfield Village.

"All week, I've been hitting it really well. Off the tee and approach to the green was one of the best so far this year," he said. "The putting was definitely better than the last couple weeks, so that's why I can see myself in the top of the leaderboard. So this is a big boost of confidence for me this week, because I hit it really well and I was really proud of myself. I'm looking forward to the rest of the season."

Prior to this tournament, An had posted two top-10s and missed four cuts in 13 tournaments.

An admitted he missed some shots in the playoff but he didn't have any regrets.

"I wasn't expecting to be in the playoff, but that was a bonus," he said. "I did what I could and then couldn't have done better. Overall, tied second is pretty good."

On the heels of the second-place finish, An jumped 29 spots to No. 56 in the latest world rankings announced Monday. His career high is 24th in 2016.

Two-time winner Kim Si-woo is currently the top-ranked South Korean at No. 45. (Yonhap)