[ The Korea Herald – Send E-mail ]
Pompeo begins talks with Kim's right-hand man ahead of nuclear summit
By AFP
Published : May 31, 2018 - 09:56
Updated : May 31, 2018 - 13:19
Kim Jong Un's right-hand man began talks with President Donald Trump's top diplomat on Wednesday amid a scramble to organize next month's historic nuclear summit between the North Korean and US leaders.

Kim Yong Chol, a veteran Pyongyang power player and a member of the young autocrat's inner circle, flew in on an Air China flight from Beijing, becoming the most senior North Korean official to visit the United States in 18 years.

Dialogue between the two sides began with a dinner meeting held in an apartment building near the UN headquarters at 7:00pm (2300 GMT), ahead of further talks Thursday to finalize planning for a June 12 summit designed to end a nuclear standoff that once threatened to plunge Korea back into war.

Pompeo, who arrived at the venue first, was accompanied by Andrew Kim, the head of the Koreas desk at the CIA. Kim Yong Chol arrived minutes later and was also accompanied by an aide. 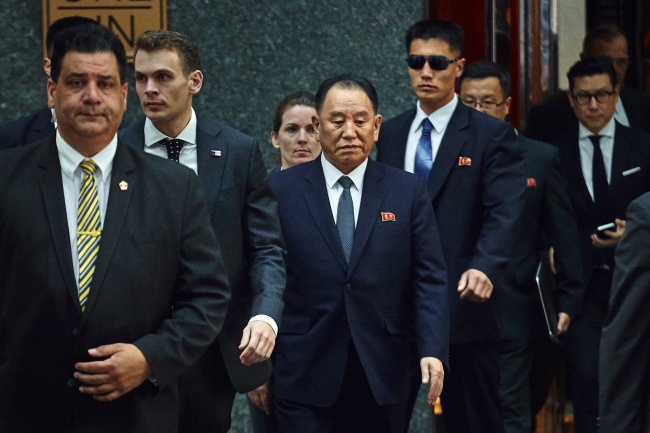 North Korea`s Kim Yong Chol, center, leaves a hotel in New York, Wednesday, May 30. (Yonhap)
Neither side spoke to the press ahead of the dinner, but a tweet by Pompeo before the meeting notably described the Trump-Kim meeting as a "potential summit."

"Looking forward to meeting with Kim Yong Chol in New York to discuss @Potus potential summit with Chairman Kim," wrote Pompeo. "We are committed to the complete, verifiable, and irreversible denuclearization of the Korean Peninsula."

US and North Korean envoys have also been meeting in Panmunjom in the demilitarized zone between North and South Korea, and an American "pre-advance" team is in Singapore to make logistical arrangements for the rapidly planned meeting.

"So far the readout from these meetings have been positive and we'll continue to move forward with them," White House spokeswoman Sarah Sanders said, confirming the plan is still for the leaders to meet in Singapore on June 12.

But with 13 days to go, the talks between General Kim and Pompeo, the former CIA chief who pioneered the latest round of face-to-face meetings, appeared to confirm that the process of getting two unpredictable leaders to the table is now on track.

"As the president says, if it happens, we'll certainly be ready," Sanders said.

Earlier this month, Trump suddenly but only briefly announced a cancellation of the summit after a North Korea issued a sharp rebuke of what it saw as threatening language for the US side, and the US side warns talks could be postponed if Kim is not serious about disarmament.

But the summit appears increasingly likely to go ahead, amid a flurry of international diplomatic activity.

Moscow said Russian Foreign Minister Sergei Lavrov would travel to North Korea on Thursday to discuss Pyongyang's nuclear program. Pompeo and Lavrov spoke by telephone for the first time Wednesday, but their offices' accounts of the call made no mention of Korea.

Pompeo called his South Korean and Singaporean counterparts over the weekend and Japan is also keenly watching summit preparations. Trump will meet its Prime Minister Shinzo Abe in Washington on June 7.

On Sunday, US negotiators, headed by Washington's ambassador to the Philippines Sung Kim, began meeting North Korean counterparts in the truce village of Panmunjom that divides the two Koreas.

"They plan to have additional meetings this week," Sanders said.

Kim Yong Chol is the most senior North Korean on US soil since Vice Marshal Jo Myong Rok met then-president Bill Clinton in 2000.

The general has played a front-seat role during recent rounds of diplomacy aimed at ending the nuclear stalemate on the Korean peninsula.

He sat next to Trump's daughter Ivanka, who is also a White House aide, during February's closing ceremony for the Winter Olympics in South Korea, an event that was seen as a turning point in the nuclear crisis.

He also accompanied Kim Jong Un on both of his recent trips to China to meet President Xi Jinping, and held talks with Pompeo when he travelled to Pyongyang.

General Kim's journey to the US caps a frenetic few days of meetings between North Korean and American officials.

The key task is to settle the agenda. The main stumbling block is likely to be the concept of "denuclearization" -- both sides say they want it, but there is a yawning gap between their definitions.

Washington wants North Korea to quickly give up all its nuclear weapons in a verifiable way in return for sanctions and economic relief.

But analysts say North Korea will be unwilling to cede its nuclear deterrent unless it is given security guarantees that the US will not try to topple the regime. (AFP)