South Korean Kim In-kyung has fallen short in a bid for her eighth career LPGA win.

Kim finished one stroke behind the champion Minjee Lee at the LPGA Volvik Championship at Travis Pointe Country Club in Ann Arbor, Michigan, on Sunday (local time). After a final round of five-under 67, Kim ended at 15-under, while Lee carded a 68 to take the title at 16-under.

Kim began the day tied for second place with three other golfers at 10-under, two behind Lee. After making the turn at 11-under, Kim reeled off four birdies over the first five holes on the back nine and pulled into a tie for first with Lee, who was playing in a group behind Kim, at 15-under through the 14th. 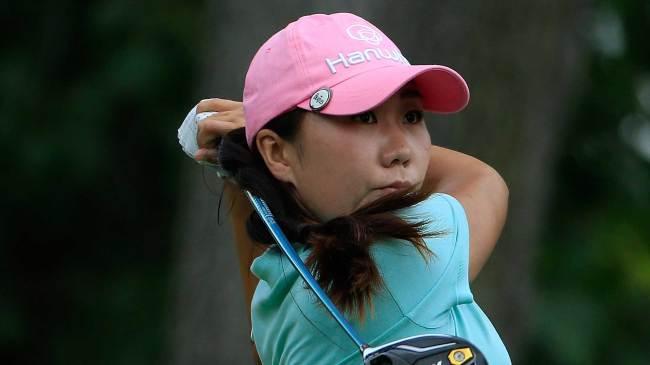 (Ladies Professional Golf Association)
But Kim quickly fell behind by two strokes with a three-putt bogey at the 15th, followed by Lee's birdie at the 14th that took her to 16-under.

Lee also made a clutch par save at the 15th to stay in front.

There was some last-minute drama. Kim got into the club house at 15-under with a birdie at the par-5 18th and momentarily found herself tied for the lead when Lee fell back to 15-under with her first bogey of the round at the par-4 17th.

But Lee, born to Korean parents in Australia, bounced back with a birdie at the 18th to clinch her fourth career LPGA title on her 22nd birthday.

There have been four South Korean champions on the LPGA Tour this year through 13 tournaments, and two others of Korean descent -- New Zealand's Lydia Ko and Lee. (Yonhap)