[ The Korea Herald – Send E-mail ]
Sexual harassment dispute surrounding YouTuber Yang Ye-won deepens
Alleged studio chief brings up restored text message conversation but the validity is questioned
By Im Eun-byel
Published : May 27, 2018 - 16:28
Updated : May 27, 2018 - 22:07
While YouTube star Yang Ye-won publically claimed that she was coerced into modeling for pornographic photos, the alleged studio chief argued that she was not forced, citing an unofficial restoration of text messages between him and Yang.

Yang uploaded a video clip on her YouTube channel on May 16, arguing she was forced to stand for pornographic photos in 2015. She also claimed she was groped by around 20 men on the set. She came forward with the story as the photos were recently leaked online. 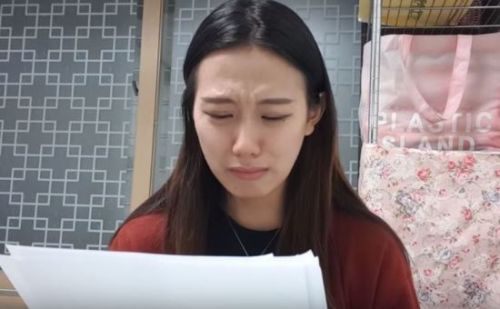 Screenshot of YouTuber Yang Ye-won talking about the photo shoots (YouTube)
After denying the sexual harassment charges and coerciveness, the alleged studio chief revealed the text messages shared between Yang and him in 2015 through a media outlet report. The messages were restored by a private data recovery firm.

According to the text messages, Yang asked for more modeling jobs, saying that she needs the money. It also indicated that she modeled 13 times for the alleged studio chief between July to September 2015. The conversation contradicts Yang’s past claim that she did a photo shoot five times.

The police, however, announced that the messages were not officially submitted to them, and therefore, the validity has to be questioned. While the mobile phone has been confiscated, the owner of the data recovery firm was summoned to the police as a testifier on Saturday.

Lee Dong-hwan of Seoul Metropolitan Police Agency even updated a post on his social media account, criticizing the media outlet who reported the news. He claimed, the story was an “excretion.”

After the claims surfaced, another media outlet revealed a clip of a phone interview with Yang.

“I was in financial difficulty, I gave up on myself. My life was ruined already, it was over,” Yang said, explaining why she booked more photo sessions. “They said, ‘I have your photos, think wisely.’ It sounded like blackmail, so I had thought that I should not test their temper.”

It was also revealed that the alleged chief was summarily indicted on May 8 for a fine of 3 million won ($2,780) for touching another female model in a photo shoot last November. He will demand a formal trial in objection of the indictment. He was also investigated in 2008 for a similar charge, but the prosecution had his indictment suspended.

According to Seoul Mapo Police Station, as of Saturday night, six women, including Yang, claimed they were sexually harassed during forced pornographic photo shoots at the alleged studio.

Meanwhile, a man in his 20s was arrested without a warrant Wednesday for spreading Yang’s photos on a pornographic website, making 3 million won worth of profit.

But the court ordered the police to release him, viewing the arrest illegal. As he was not related to the photo shoots in question, the police is still searching for the person who first released the photos online.