INCHEON -- Firefighters completely put out a cargo ship fire Thursday, three days after the blaze started on the vehicle carrier vessel anchored at the port of Incheon with thousands of used cars loaded on board.

None of the 31 crew members of the 52,224-ton Auto Banner were hurt as they either fled on their own or were rescued, but the fire gutted about 1,500 used cars, sending black smoke from burning tires billowing into the sky over Incheon, west of Seoul.

A total of 2,438 used cars were on the ship when the blaze broke out Monday morning. Fire officials said the fire is believed to have started on the ship's 11th floor from the overheated engine of one of the cars. The blaze also gutted the 12th and 13th floors.

About 840 firefighters and some 240 fire trucks were mobilized for the operation. 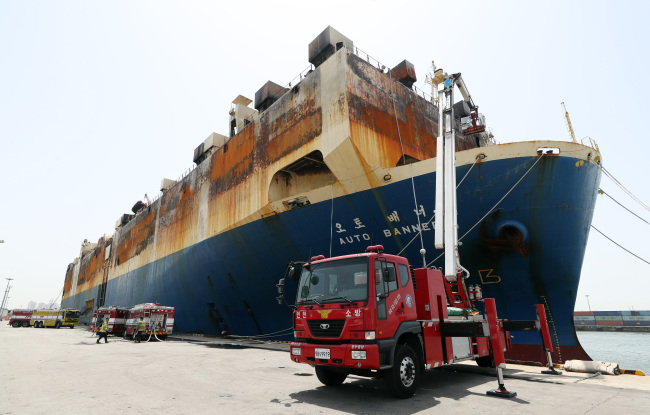 (Yonhap)
Fire officials are trying to determine the exact cause of the blaze and the amount of damage. They said it would take at least a month to scrutinize the scene.

"We've obtained a statement that the fire started in the front of a car on the ship's 11th floor," a Coast Guard official said. "Specific results of our investigation will be announced after a detailed scrutiny by a joint team of officials from the fire department and the National Forensic Service."

The vessel entered the port from the United States on Saturday and planned to leave for Libya on Tuesday. (Yonhap)