South Korea's Chun In-gee has lost her chance to end a 20-month LPGA title drought in a playoff.

Chun came up short at the weather-shortened Kingsmill Championship in a three-way playoff with Ariya Jutanugarn and Nasa Hataoka on River Course at Kingsmill Resort in Williamsburg, Virginia, on Sunday (local time). Chun was the first to be eliminated from the sudden-death play with a par on the first playoff hole, where Jutanugarn and Hataoka both birdied. Chun dropped to 0-3 in her career in LPGA playoffs.

Jutanugarn defeated Hataoka with a birdie on the second playoff hole for her first win of 2018 and eighth of her career. 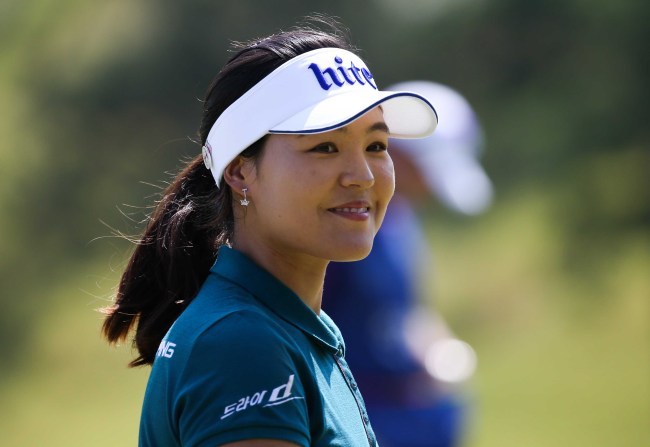 Chun In-gee (Herald DB)
The tournament was reduced to 54 holes after the scheduled second round was wiped out by heavy rains. Chun, also a runner-up at last year's Kingsmill Championship, finished the regulation at 14-under 199, tied with Jutanugarn and Hataoka. Jutanugarn had the best third round of the three with 66, followed by Hataoka's 67 and Chun's 68.

The three went back to the 18th hole for the first playoff hole. And Hataoka stiffed her second shot to about three feet above the hole, with Jutanugarn a few feet farther below the hole.

Chun was farthest from the cup, and she missed her attempt just to the right. Jutanugarn drained her birdie putt, and Hataoka calmly made hers to extend the playoff without Chun.

And Jutanugarn clinched the title on the players' second go-round at the 18th with a birdie. Hataoka could only manage par in a bid for her first LPGA win.

Chun, world No. 15 and the 2016 LPGA Rookie of the Year, was seeking her first LPGA win since the Evian Championship in September 2016.

Chun took a one-stroke lead into the final day at 11-under, one better than Austin Ernst and Hataoka. The South Korean had four birdies against a bogey while missing a slew of birdie opportunities, and had to make a lengthy birdie attempt at the 17th just to get into the playoff.

This was Chun's second top-10 finish in seven starts this year. She began the year at No. 5 in the world but has slipped to No. 15 through last week's rankings. (Yonhap)