The North invited four reporters each from wire news and broadcasting companies for the event to be held from May 23-25 to dismantle the Punggye-ri site, where the North has carried out all six of its nuclear denotation tests, according to the ministry.

"The invited reporters will receive visas from the North Korean embassy in China and fly from Beijing on May 22 to Kalma airport in Wonsan along with other foreign reporters," the ministry said, citing information from the North.

From the North's eastern city of Wonsan, they will move near the test site by train and will return home after the event via charter flight either on May 26 or May 27, according to the ministry. 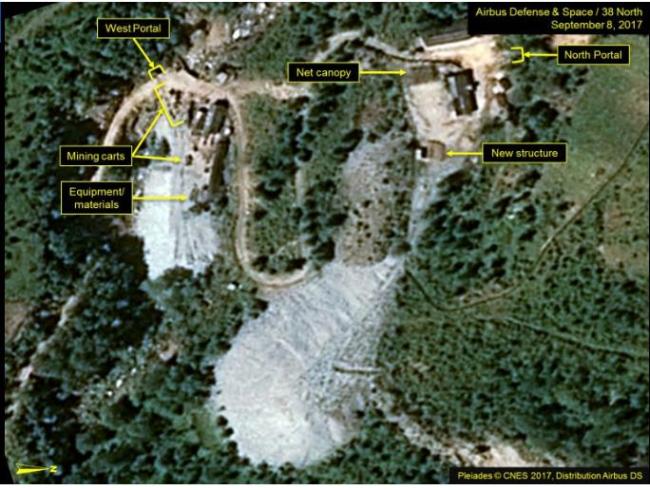 (Yonhap)
On Saturday, North Korea announced that it will publicly dismantle the test site located in the country's northern region in a ceremony to which only journalists from South Korea, China, Russia, the United States and Britain will be invited to cover.

Critics say that the nuclear site has already been rendered useless following the previous six blast tests and that dismantling it can be seen just as a symbolic step.

Experts say that it is still a meaningful step toward denuclearization ahead of its unprecedented summit talks, to be held on June 12 with the US, where its nuclear weapons program will likely top the agenda.

Meanwhile, an official from Seoul's presidential office Cheong Wa Dae said the country plans to ask the North to increase the number of South Korean journalists permitted to cover the event.

Such a request will be made at high-level inter-Korean dialogue, scheduled to be held at the border village of Panmunjom on Wednesday, the Cheong Wa Dae official told reporters on condition of anonymity.

"Cheong Wa Dae plans to propose increasing the number of news outlets and see if daily newspapers could be included in the list at the high-level talks to be held tomorrow," the official said.

The planned dismantlement of the Punggye-ri site follows a historic summit between South Korean President Moon Jae-in and North Korean leader Kim Jong-un held April 27, in which the leaders agreed to pursue complete denuclearization of the Korean Peninsula.

It also comes ahead of an unprecedented US-North Korea summit, which will be held in Singapore on June 12. (Yonhap)