The topics for discussion will include organizing a joint Korean march at the opening ceremony of the 2018 Asian Games and assembling unified Korean teams in multiple sports at the quadrennial competition.

The Asian Games will run from Aug. 18 to Sept. 2 in Jakarta and Palembang, Indonesia. 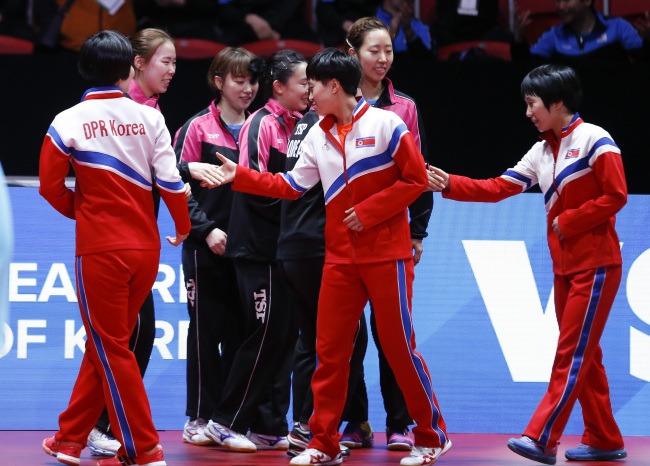 (Yonhap)
The Koreas have already agreed to push for a joint march at the opening ceremony. And talks for combined teams picked up speed following the inter-Korean summit between South Korean President Moon Jae-in and North Korean leader Kim Jong-un last week.

"I don't foresee problems with a joint march, but having unified teams will not be so easy," Lee said. "In sports such as soft tennis and judo, we've already selected athletes for the Asian Games. Unless the Asian federations of these sports agree to expand entries, bringing the two Koreas together will be difficult to do."

The Korea Table Tennis Association successfully combined the two Korean women's teams at the World Team Table Tennis Championships in Sweden on Thursday. The unified squad will take on Japan in the semifinals later Friday. The KTTA has also finalized its proposal for a joint team at the Asian Games, and it is hoping both Koreas will retain their allotted roster spots -- two players each in the men's and women's singles, two teams each in the mixed doubles and five players in the team event -- even if they combine their squads.

The Korean Canoe Federation said Monday it will try to form a unified Korean team in the dragon boat race and will try to schedule open practice sessions on both sides of the border -- at the Han River in the South and the Daedong River in the North.

Following his meeting with Sheikh Ahmad, Lee said he will discuss the outcome with the sports ministry and unification ministry and will also push for working-level inter-Korean sports talks.

The Koreas have never had a joint team at the Asian Games, winter or summer. In 1991, they fielded unified teams at the World Table Tennis Championships and the FIFA World Youth Championship.

At the PyeongChang Winter Olympics in February this year, the Koreas put together a joint women's hockey team.(Yonhap)