The president told the Department of Defense to "prepare options for drawing down American troops in South Korea" in the run-up to his landmark summit with North Korean leader Kim Jong-un in the following weeks, The New York Times reported. The news outlet cited several people briefed on the order.

The downsizing is not designed as a "bargaining chip" in Trump's talks with Kim, but a peace treaty between the two Koreas could diminish the need for the presence of the more than 20,000 American soldiers on the South side of the Korean Peninsula, the report said. 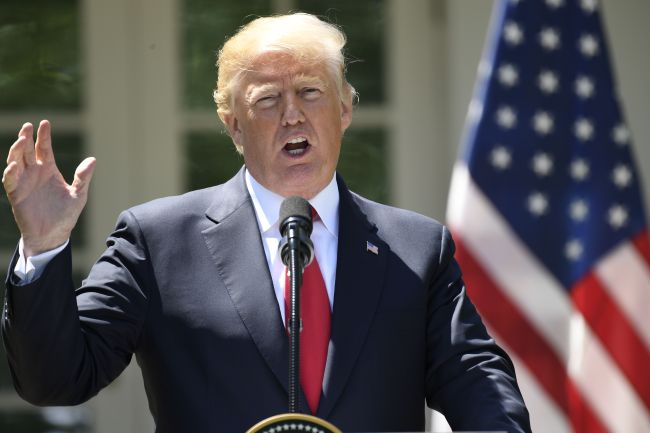 (Yonhap)
The Times also attributed the downsizing order to the ongoing negotiations between Washington and Seoul over how to share the cost of keeping the US forces on the peninsula.

Trump has been determined to withdraw the troops, arguing that the United States is not adequately compensated for the cost, according to the report.

The Pentagon declined to confirm the report, saying only that the US remains committed to its mission.

"The Department of Defense's mission in South Korea remains the same, and our force posture has not changed," Lt. Col. Chris Logan, a Pentagon spokesman, said in comments emailed to Yonhap. "The Department of Defense remains committed to supporting the maximum pressure campaign, developing and maintaining military options for the President and reinforcing our ironclad security commitment with our allies."

He added that "we all remain committed to complete, verifiable and irreversible denuclearization of the Korean Peninsula."

The high possibility of negotiating an inter-Korean peace treaty between Trump and Kim at the upcoming summit has brought into question the future role of US Forces Korea, whose mission is to deter potential North Korean aggression.

President Moon Jae-in's special adviser for foreign policy and national security, Moon Chung-in, fueled the question further after publishing an article in Foreign Affairs magazine saying it will be "difficult to justify" the presence of USFK after signing a peace treaty.

This immediately aroused the ire of South Korean conservatives, who argue the withdrawal would mean a weakening of the South Korea-US treaty alliance and the removal of the US nuclear umbrella over South Korea.

As the controversy spreads, the presidential office Cheong Wa Dae has reiterated that US forces would still need to be stationed in the country even after a peace agreement is signed with North Korea.

An official on the National Security Council gave the assurance in a meeting with Moon's top security adviser Chung Eui-yong, who is currently in Washington for talks on Trump's upcoming summit with Kim.(Yonhap)