[ The Korea Herald – Send E-mail ]
[Herald Interview] ‘Traditional media the only source of reliable information’
French intellect Guy Sorman urges print media to invest in content in order to thrive
By Kim Hoo-ran
Published : May 3, 2018 - 17:08
Updated : May 3, 2018 - 18:17
World-renowned French intellect and author Guy Sorman has been a longtime observer of Korea -- and at times its sharp critic.

Sorman’s connection to Korea goes back to his friendship with the late video artist Paik Nam-june in the early 1980s. The New York-based artist was not well-known in his home country, but spoke a lot about Korea as a source of inspiration, recalled Sorman. Curious about the little-known country, Sorman decided to visit.

“It was still an unknown country in the West,” he told The Korea Herald on April 18 in Seoul, explaining that not many people knew Korea as a distinct civilization back then. In most people’s minds, Korea was somewhere between the Chinese civilization and the Japanese civilization.

While it was the arts that first piqued Sorman’s interest in Korea, he has since been involved in the country in many different capacities, perhaps most prominently as a global adviser to a South Korean president. 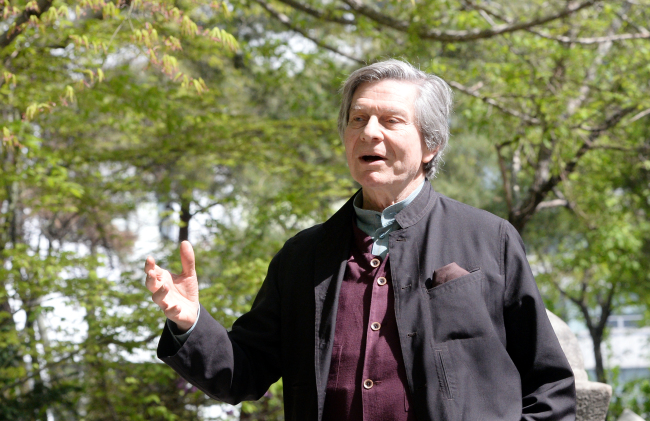 French intellect and author Guy Sorman speaks with The Korea Herald in Seoul on April 18. (Park Hyun-koo/ The Korea Herald)
A true pundit, Sorman’s interests are broad and he is expansive on any given topic. Broaching the subject of the crisis of print media, Sorman begged to differ. “Common sense is to say traditional media has lost influence. I don’t think it is true,” he said. This is because traditional media is the only source of reliable information, especially the print media, Sorman added.

Social media, on the other hand, will “confirm your prejudices,” he said, objecting to the tribal dimension of social media.

To survive and to thrive, the print media have to be reliable with the news they print, Sorman offered as a caveat. “A brand is a guarantee. A newspaper brand is the same, it is the guarantee of content,” he said. “Respected newspapers are good because they invest in content,” he added.

“Print press has a great future if you are the best at what you do. There is no place for (a) mediocre newspaper.”

As for the pressure traditional media face to go online, Sorman offered a contradictory perspective. Warning that going exclusively online may result in the website being forced to close after one to two years, he urged exploiting the unique advantages of each platform.

“There must be parallel progress of both web and print media. The web could be used as a marketing tool to attract people to the print edition. Using online editions to recruit subscribers is a way to reinforce each other,” he said.

It would be a big mistake to go exclusively online, Sorman warned. “If you are web only, you lose a lot of your credibility,” he said. One also loses money in competing with numerous other websites, he added, pointing out, “No pure online player is making money.”

A print publication’s brand can be utilized to generate income in several ways, Sorman explained.

“With the print edition, you can organize conferences, you can make money through different events, for example,” he said. “Building a brand is most important in economic life. To do only (a) newspaper is underutilization of the brand,” he advised.

Sorman noted The Korea Herald’s unique role as the main source of information about Korea for people outside of the country, especially decision-makers, and for many Koreans as a way to learn English.

As a prolific author who writes in three languages -- his native French and non-native languages, English and Spanish -- Sorman empathizes with the difficulties of writing in a non-native language to a foreign audience. “It is much more demanding, complicated,” he said. “That is why I like it!”

“What you thought universal is not universal at all. You reinvent, find new common ground, introduce elements from their (readers’) own culture,” he said about his process of writing in a foreign language. “It is not easy but very stimulating,” he said, adding, “It is my choice to write in non-native languages.” 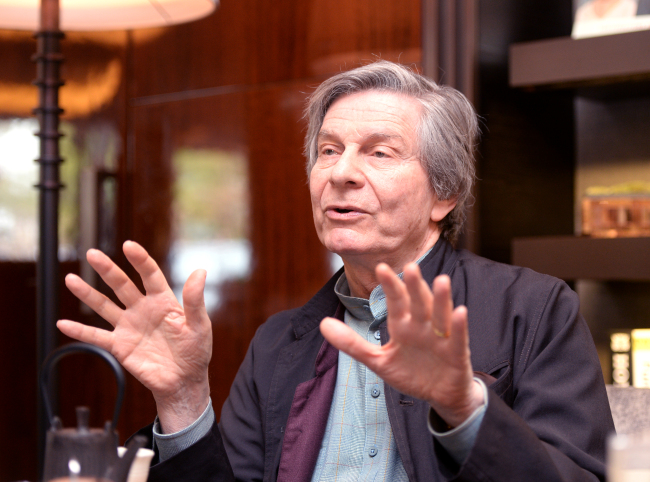 French intellect and author Guy Sorman speaks with The Korea Herald in Seoul on April 18. (Park Hyun-koo/ The Korea Herald)
“I would like to become a ‘global writer,’ involving globalization of my thoughts coherent with my view of the world,” he said.

In spite of all the efforts, Sorman conceded, “You are a prisoner of your own culture.”

A problem with American columnists, he finds, is that they tend to think that everything American is global. “This can be irritating, he said, citing as an example of international conferences where US scholars think that everyone understands what he or she is talking about.

Despite the recent whirlwind of meetings aimed at bringing about lasting peace on the Korean Peninsula, Sorman remained skeptical about the prospects of reunification. “Thirty years ago, I said I didn’t see it happening. Beyond 10 years, nobody knows,” he said.

What he has observed in recent years is that South Koreans are less interested in unification, as “sentimental relations” have disappeared while North Korea has gained enormous legitimacy and has no reason now for isolation.

Explaining that everybody will claim victory in the upcoming US-North Korea talks, Sorman predicted the true victor would be North Korea, but that the summit would be presented in terms of victory for the US for having obtained denuclearization of the North.

Sorman gave credit to President Moon Jae-in for his role in the recent developments, saying, “Moon has been smart in defusing the conflict and talking to everyone.”