[ The Korea Herald – Send E-mail ]
Complex calculations over signing peace treaty
By Ock Hyun-ju
Published : May 2, 2018 - 18:21
Updated : May 2, 2018 - 18:22
The presidential office on Wednesday signaled its intention to declare an end to the Korean War with North Korea and the US, and involve China when signing a peace treaty, making clearer its roadmap to building a peace regime on the Korean Peninsula.

“Realistically, we have a North Korean nuclear issue and it is difficult to replace an armistice with a peace treaty right away, so there could be a declaration of end to the Korean War as a middle step,” an official from the presidential office told reporters on condition of anonymity. “It is a political declaration to end the war and the relations of hostilities and conflicts.” 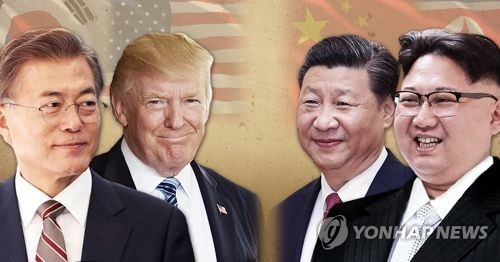 South Korean President Moon Jae-in (left), US President Donald Trump, Chinese President Xi Jinping, North Korean leader Kim Jong-un. (Yonhap)
When declaring an end to the Korean War, there is a need to rethink whether China should be part of it, he said, but China’s role is vital in establishing a peace regime on the Korean Peninsula.

“China already ended hostilities with South Korea and the US by normalizing its relations with the countries,” the official said.

“A peace treaty is meaningful in that it can lay the legal and institutional groundwork to settle peace on the Korean Peninsula, and China’s role is considerably large. Mentioning three-way or four-way meetings (to discuss signing of a peace treaty) does not mean an exclusion of China.”

Moon and Kim said in a joint declaration that the two countries committed to “actively pursue trilateral meetings involving the two Koreas and the United States, or quadrilateral meetings involving the two Koreas, the United States and China with a view to declaring an end to the war and establishing a permanent and solid peace regime.”

As the two Koreas push for a declaration of an end to the Korean War within the year, the US and China -- all signatories to the armistice signed in 1953 -- backed their effort. On signing a peace treaty, however, the key players on the peninsula appear to have differing views.

South Korea and North Korea appear to be on the same side about hoping to sign a peace treaty on the peninsula within the year, said an expert.

“North Korea has traditionally called for signing a peace treaty before it takes any steps to denuclearize, saying it is a basis for building trust between itself and the US,” said Hong Min, senior researcher at the Korean Institute for National Unification. “Signing a peace treaty is what North Korea wants the most to assure its regime security.”

“This time, the two Koreas seem to want to make the peace treaty legally binding, earning a parliamentary approval as well as international community’s support, so that it cannot be reversed.”

The US supports the Koreas declaring an end to the Korean War. On signing a peace treaty, it could spell complications domestically and internationally, but Washington might back the idea, if it could lead North Korea to abandon its nuclear arsenal completely, another expert said.

US President Donald Trump, who is planning to hold his own meeting with the North Korean leader in May, said earlier the Koreas have his “blessing” to discuss the end of the Korean War.

“A peace treaty could undermine the justification for the US troops stationed in South Korea. It could also pose questions over the role of the United Nations Command here, so the US could be sensitive about the issue,” said Park Won-gon, professor at Handong Global University.

Some 28,500 US soldiers are based in South Korea largely to deter North Korea’s aggression, under a security agreement reached between Seoul and Washington. Despite a peace treaty, there is a legal basis for the stationing of the US armed forces, with their role expected to change to defusing military confrontations between neighboring countries like China and Japan.

North Korea, which has long set a withdrawal of the US troops from South Korea as a condition for abandoning its nuclear weapons programs, has recently hinted that it is willing to accept continued presence of US armed forces on the peninsula.

The US-led United Nations Command is a result of the UN Security Council Resolution 84, signed in 1950, representing the armistice regime. A peace treaty would legally end the UNC mission here.

Washington has considered a peace treaty between two Koreas and normalization of diplomatic relations with Pyongyang as an end state after the North substantially dismantles its nuclear weapons programs and mutual trust is built.

“But a peace treaty is a key reward for the North seeking a security assurance from the US, so the US would be open to the idea if the North takes steps to denuclearize.”

China, on the other hand, appears to be increasingly nervous about ongoing discussions on declaring an end to the Korean War, possibly without it. Beijing could also challenge the idea of signing a peace treaty, depending on the new role of US armed forces in South Korea.

China is willing to “play an active role,” its foreign ministry earlier said, in the process of ending the state of war on the peninsula.

“China‘s greatest concern is that the three-way talks among South Korea, North Korea and the US would allow the continued presence of the US troops and the US’ strategic assets in South Korea. It is worried that the US armed forces would take a new role to target China,” said Chung Jae-heung, a researcher at the Sejong Institute.

“That‘s why China thinks it should be part of a peace deal,” he said.

China, North Korea’s traditional ally and its biggest trading partner, has tried to improve its frayed relations with Pyongyang in recent months, in what appears to be a move to dismiss concerns that it is being left out of critical decisions on the Korean Peninsula and losing its influence over the North Korean regime -- a key point of leverage over the US.

Beijing’s relations with Pyongyang have been strained due to its backing of international sanctions against the reclusive regime over the North’s nuclear weapons programs.