WASHINGTON -- US President Donald Trump said Tuesday the location and date of his meeting with North Korean leader Kim Jong-un would be announced in the next couple of days.

Trump has said he will meet with Kim in three to four weeks to discuss the denuclearization of the regime. On Monday he said the demilitarized zone dividing the two Koreas, and Singapore, were being considered for the site.

"We're setting up meetings right now, and I think it's probably going to be announced over the next couple of days -- location and date," Trump told reporters at the White House. 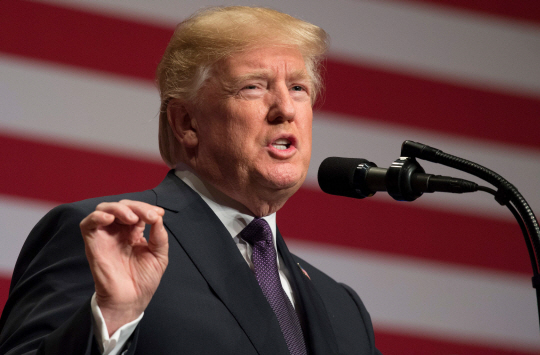 US President Donald Trump (AFP-Yonhap)
Trump also said he thought it was "very generous" of South Korean President Moon Jae-in to suggest he should receive the Nobel Peace Prize for bringing North Korea to the negotiation table.

Moon was commenting on suggestions that he win the prize, saying Trump could take it if the two Koreas can have peace.

He also said he wants to "get peace," calling it the "main thing."

"That was a big problem, and I think it's going to work out well," Trump said.

Moon and Kim met inside the DMZ last Friday and agreed to pursue "complete denuclearization" of the Korean Peninsula while also working towards a peace treaty to formally end the 1950-53 Korean War.

The Trump-Kim meeting is expected to focus on how denuclearization will be achieved, and what concessions Pyongyang will seek in return.

White House press secretary Sarah Sanders declined to go into detail on deliberations over the DMZ.

"But the list has been narrowed, as the president said, and we expect to have an announcement on that soon," she told reporters at a regular press briefing. (Yonhap)