South Korea's presidential office Cheong Wa Dae said Tuesday that the border truce village of Panmunjom, if chosen for the upcoming US-North Korea summit, would serve as a meaningful venue to mark a "new milestone of peace."

The remarks came after US President Donald Trump mentioned Panmunjom as a possible site for his meeting with North Korean leader Kim Jong-un expected to be held this month or in July.

"(We) think Panmunjom is quite meaningful as a place to erode the divide and establish a new milestone for peace," a senior presidential official told reporters. "Wouldn't Panmunjom be the most symbolic place?" 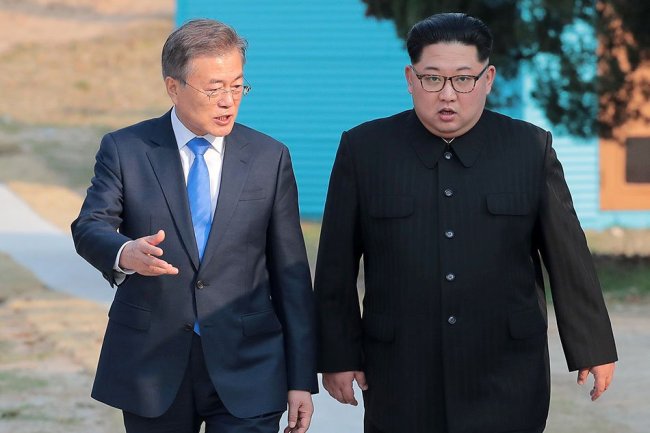 South Korean President Moon Jae-in and North Korean leader Kim Jong Un walk together at the truce village of Panmunjom inside the demilitarized zone separating the two Koreas, South Korea, April 27. (Reuters)
Panmunjom is the site where South Korean President Moon Jae-in and Kim held their historic summit last Friday. The third cross-border summit led to a series of landmark agreements, including the leaders' affirmation of the shared goal of "complete denuclearization."

For the Trump-Kim summit, a set of countries have been mentioned, including Singapore and Mongolia. Trump is expected to pick a site soon for the high-stakes, unprecedented summit with the reclusive leader.

"Numerous countries are being considered for the MEETING, but would Peace House/Freedom House, on the Border of North & South Korea, be a more Representative, Important and Lasting site than a third party country?" Trump wrote on Twitter. "Just asking!" (Yonhap)