With summer just two months away, the treadmills were occupied with exercisers trying to shed the extra pounds no longer to be hidden beneath winter’s trendy long, padded jackets.

Moving further to the back of the gym, Pilates head Instructor Lee Su-yeol, 39, opened the door to his small, private studio, where he holds his one-on-one Pilates class. In contrast to the upbeat ambience of the gym, soft classical tunes filled the dimly lit studio. 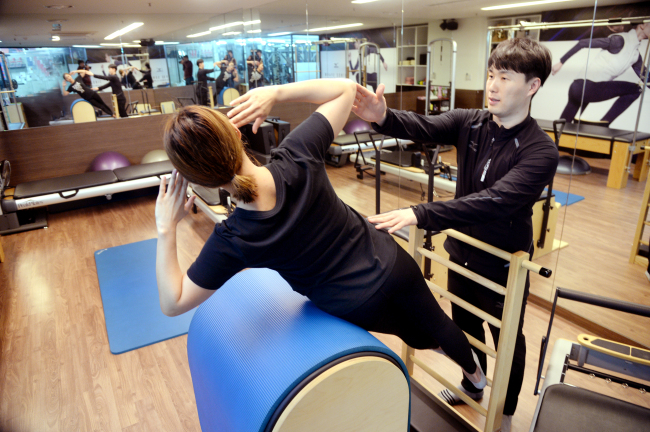 Pilates instructor Lee Su-yeol helps a student to accurately position her body on a board. (Park Hyun-koo/The Korea Herald)
With 11 years under his belt as an instructor, Lee has been sought out by many clients, including actress Park Shin-hye. He has also helped mold the bodies of Korean actresses Lee Si-young, Jun Ji-hyun and Lee Som in the past.

When he was attending Myongji University’s Department of Physical Education, Lee couldn’t make up his mind about his career, but with words of encouragement from a friend, he jumped into the then relatively unknown world of Pilates in 2005.

“Funny as it might sound, my acquaintance told me that if I become a Pilates instructor, I would be surrounded by ‘Gangnam beauties’ all the time because women love Pilates,” Lee told The Korea Herald. 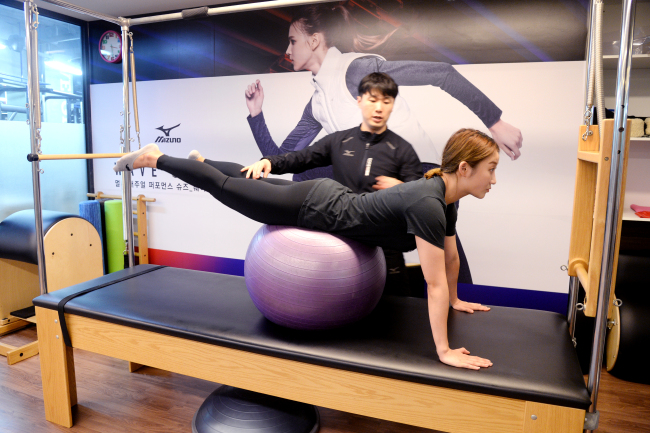 Lee Su-yeol instructs a student on how to balance her body on a ball. The exercise improves core muscle strength and balance. (Park Hyun-koo/The Korea Herald)
Pilates is essentially a physical fitness system that puts an emphasis on strengthening the core muscles, balance, flexibility and overall well-being. Developed in the early 20th century by Joseph H. Pilates, Pilates is now widely practiced around the world.

The founder, who had suffered from rickets, asthma and rheumatism, aimed to alleviate pain and physical discomfort through exercise.

Previously thought of as a “woman’s workout,” Pilates did not garner as much attention from Korean men as it did among women in 2005, when it began gaining attention here. 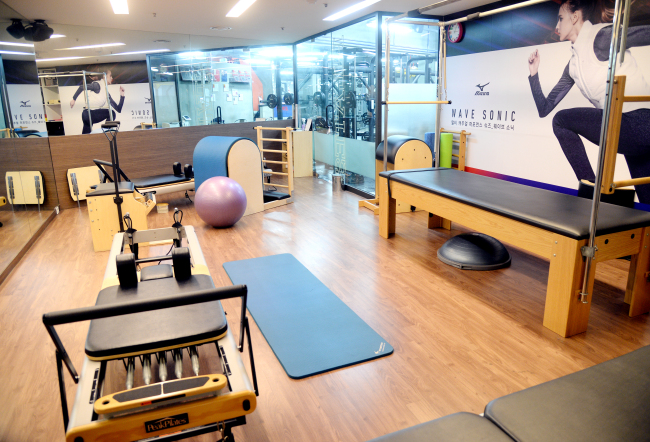 The small, private Pilates studio within King Fit gym (Park Hyun-koo/The Korea Herald)
But according to Lee, Pilates is becoming increasingly popular with Korean men. He opined that because the discipline can be extremely beneficial in creating “feminine” body lines with its “smoother movements,” men had been hesitant to try it out before.

“I have actually seen more men walk into King Fit in the last year or so, inquiring about our Pilates program. Many of our male clients initially complained of back, neck and lower back pain from working overtime. After multiple sessions, all of them gave us positive feedback in feeling much less pain,” Lee said.

In some Korean companies, where overtime work is more norm than exception, many working men and women suffer from physical discomfort that tends to worsen over time without proper treatment. 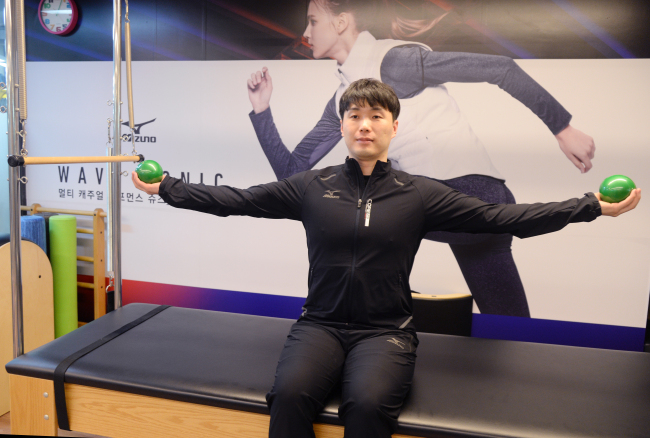 Lee Su-yeol performs a simple exercise beginners can try at home using mini balls to improve muscle tone in one’s arms. (Park Hyun-koo/The Korea Herald)
While working Koreans complain of various problems, the most common is “turtle neck syndrome” caused by long hours of sitting in front of a computer or slouching over smartphones.

The condition is called turtle neck syndrome because sufferers abnormally stretch his or her neck like turtles do. Lee has overseen many classes to help clients achieve drastic improvements in posture, balance, flexibility and muscle tone. He stressed the importance of neck positioning for a healthy body posture and overall physical health.

“If our neck, which connects from the base of the skull all the way down to the tailbone, is stretched out, then this leads to severe deviations in body posture,” Lee said.

Because some may not have the adequate time and resources to hit the gym, Lee recommends watching home videos and practicing simple exercises at home. But due to the risk of getting hurt, Lee said only those who have had at least six months of personal training should train at home. 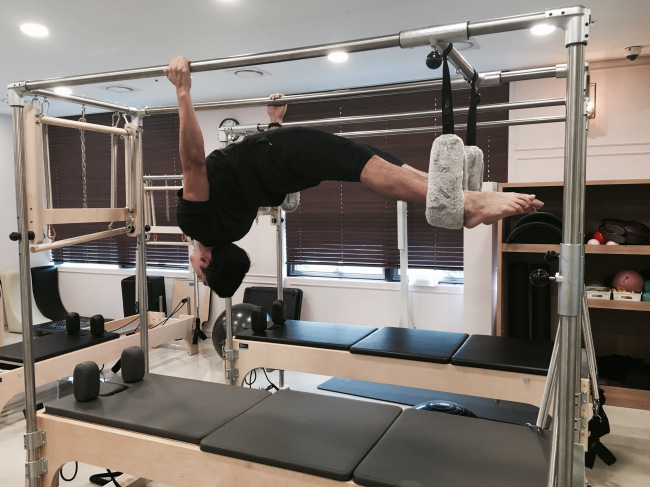 As a huge supporter of all sports, Jung said it was only three years ago that Pilates took him by surprise.

“I suffered many sports injuries ever since I was a child. However, at one point in 2015, I felt I needed to strengthen my overall balance and flexibility,” Jung said. “After taking a few lessons, I was instantly lured by the numerous benefits the sport offered. That’s how I became an instructor.”

Jung expressed concerns over people with cervical disc problems trying out Pilates at home via online videos. In order to safely exercise at home, he added that only people with years of exercise, specifically “knowledge of muscle movement,” should follow online instructors. Beginners to the discipline must learn from a well-trained instructor to accurately utilize small muscles. 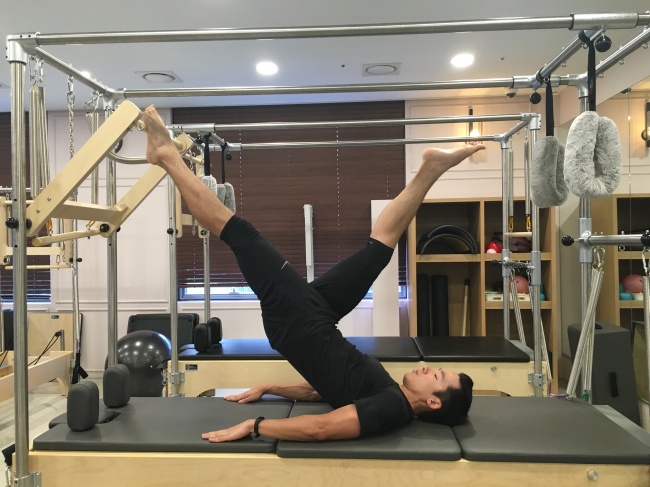 Leo Jung performs an advanced inverted hanging scissors on the Pilates Cadillac. (Photo courtesy of Leo Jung)
Living in a fast-paced Korean society and maintaining good work-life balance is no easy task. Work-related stress can undermine the health of workers.

Jung, stressing that “a healthy body means a healthy mind,” said he would create fresh content based on his firsthand sports knowledge to spread the advantages of working out.

In the same vein, Lee shared future plans on developing Pilates exercise movements geared toward different groups based on sex and age. Similar to Lululemon’s aggressive marketing for “Broga, yoga for men,” he expressed the hope to eliminate remaining stereotypes that label Pilates as a pursuit solely for women.