The song, titled "You're so Beautiful," is now available at the company's official website as well as on its YouTube and Facebook accounts, with subtitles provided in English, Chinese and Japanese, the company said.

The K-pop sensation BTS has been serving as the duty-free operator's model since November 2017. 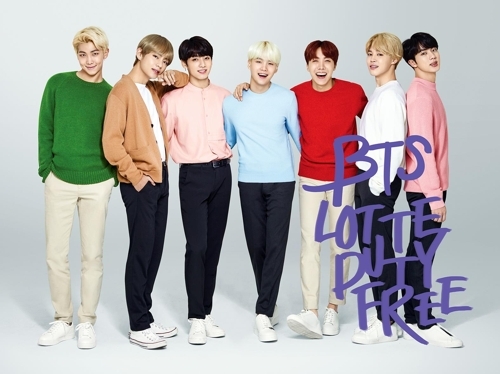 In this undated photo provided by Lotte Duty Free, South Korea`s top duty-free operator, members of the K-pop boy band BTS pose for a photo. (Yonhap)
Lotte Duty Free's move to expand its presence in the global market comes as local retailers are gearing up for a potential influx of Chinese customers following a senior Chinese official's visit last month.

During a meeting with President Moon Jae-in, Chinese State Councilor Yang Jiechi said there will be "tangible results in the near future" when Moon requested that China terminate what is seen as economic retaliation for the deployment of an advanced US missile defense system in South Korea.

The number of visitors from the neighboring country has sharply dropped in the past year as China took restrictive measures against South Korean firms, including the prohibition of group tours to the country. (Yonhap)