[ The Korea Herald – Send E-mail ]
[Weekender] Where styles are made
For decades, beauty salons have aided Koreans staying in style
By Yoon Min-sik
Published : Apr 6, 2018 - 14:39
Updated : Apr 6, 2018 - 16:43
It does not take long to realize that Koreans care a lot about looking good. Just take to the streets of Gangnam, Hongdae or Itaewon to find a parade of the fashionably -- and sometimes scantily -- dressed.

Perfectly maintained hair plays a crucial part in style too, to which Koreans have turned to beauty salons, beauty parlors or beauty shops for help. 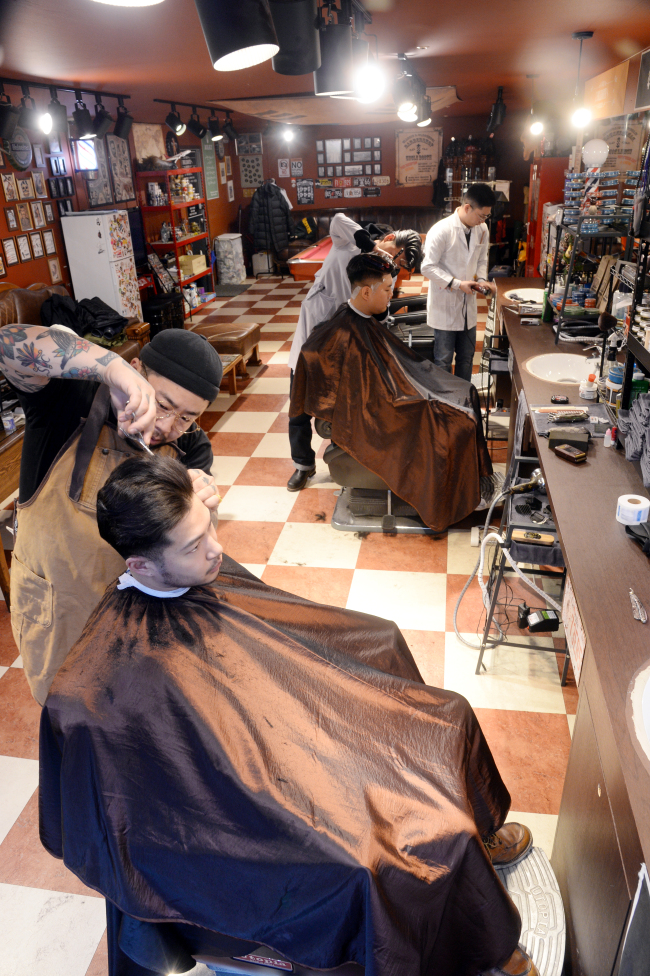 Prior to the 20th century, the Confucianism that dominated the Joseon era prohibited people from cutting their hair. While most did cut their hair to some extent, it would be only minimal, as the hair would be preserved in respect to ancestors.

Changes began during the late 19th century amid the modernization of Korea, as men were ordered by government officials to cut their hair. The traditional styles of Korea -- from the knotted-up “sangtu” to women’s “binyeo” -- gave away to more modern styles.

Traces of the oldest beauty salons in the country can be found in a 1920 newspaper advertisement for “Gyeongseong Miyongwon.” But most of the salons at the time focused on skin care, as Korean women were reluctant to abandon the traditional braided hairstyles. Style was no top priority either, as it was not uncommon for women to wash their hair just once a month.

Hwashin Miyongwon, founded by Oh Yeop-ju in 1933, is believed to be the first hair salon in the country. Oh is recorded as the first Korean hairstylist, and her service came at a hefty price. It cost 20 won to perm one’s hair -- which now would be less than 2 cents, but then could buy about 160 kilograms of rice.

Up until the 1990s, conventional wisdom held that men not go to hair salons. The culture of masculinity then prevented men from cutting their hair at the same place as women, as they opted almost exclusively for barbershops.

The first-ever barbershop actually predates hair salons, to 1901. King Gojong’s order for his countrymen to cut their locks took years to gain acceptance, from the first decree in 1985 to the second in 1900.

“Dongheung Ibalso” not only created new styles, but also trimmed up for those who had their hair forcibly cut by government officials.

Both barbershops and hair salons thrived for decades, as the idea of more intricate male grooming remained alien for many Koreans. The barbershops actually outnumbered hair salons -- 29,713 to 16,330 in 1975 -- as barbershops were seen as a place where anyone could go get a haircut while hair salons were viewed as solely for women.

In the 1990s, the popularity of celebrities like actors Jang Dong-gun, Jung Woo-sung and the emergence of what would later be known as K-pop idol stars started a fad of “pretty men.” Slowly, taboos against men visiting hair salons died out in the 1990s and 2000s. Nationwide chain Blue Club contributed to the trend, as it advertised itself as a hair salon exclusively for men.

According to the National Tax Service, as of September 2016, trends had fully reversed to see hair salons outnumber barbershops 93,277 to 12,432.

Despite the decline in numbers, barbershops still occupy a place in the hearts of many Korean men.

Corner barbershops still have regulars who find comfort in the humble interior and cozy atmosphere. The barbers themselves tend to be middle-aged men, which is a selling point for other middle-aged men looking for a friendly chat.

Beauty salons have evolved over the years as well, with famous hair designers like Cha Hong establishing parlors that not only cut hair, but also provide comprehensive care such as for makeup, nail polishing and hair dyeing.

Hair designers not only cut and style hair to the request of customers, but also provide advice on overall style. They consider themselves artists and take pride in their expertise, showing that hairstyling in Korea has come a long way from trimming the edges of forcibly cut hair a century ago.