Former South Chungcheong Province Gov. An Hee-jung appeared at a Seoul court Wednesday for an arraignment over sexual offense charges after prosecutors sought an arrest warrant for him a second time.

"I will tell everything in court," An told reporters upon arrival at the Seoul Western District Court.

On Monday, prosecutors filed a new request for a court warrant to arrest An after an earlier request was rejected last week on the grounds that he's unlikely to flee or destroy evidence. 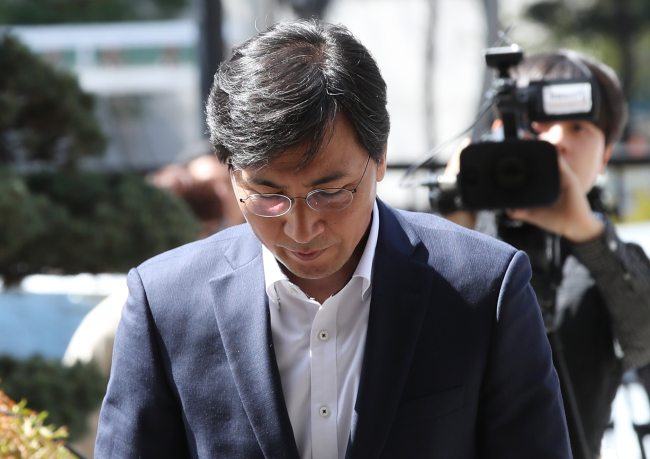 Former South Chungcheong Province Gov. An Hee-jung bows his head after arriving at the Seoul Western District Court for an arraignment on Wednesday. (Yonhap)
Prosecutors have since conducted a supplementary investigation and said they applied for a warrant again in light of the case's seriousness and concerns that he may attempt to destroy evidence.

The court is expected to decide whether to issue the warrant as early as Wednesday night.

An, 54, is accused of forcing his former secretary to have sex with him multiple times over the past year in Seoul and while on overseas business trips.

The secretary, Kim Ji-eun, made the revelation in a television news interview early this month. An has issued a public apology but has not admitted to the charges. He insists the relationship with Kim was consensual.

The liberal politician, who was once considered a potential presidential candidate, resigned as governor in the wake of the scandal.

He faces another complaint, filed by a research staff member from a think tank, who also alleged she was sexually abused by him. But the charges made for the arrest warrant only include Kim's case because the latter complaint is still being investigated, prosecutors said. (Yonhap)