Kim Yong-chol, a ranking Workers' Party official in charge of affairs with South Korea, hosted a dinner for the 160-member art troupe after they completed their second and last concert in Pyongyang Tuesday.

In his opening remarks, Kim said he believes a sharing of hearts will lead to a sharing of will, and ultimately open a pathway, the pool reports said. 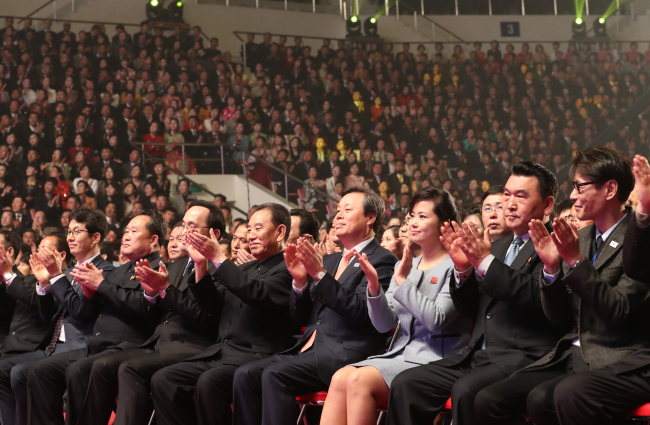 (Yonhap)
"If the artists of North and South combine their efforts by carrying the love for our people in song, as they did this time, I believe it will bring even greater and more abundant fruits to the entire (Korean) people," he was quoted as saying. "Let us cherish the overwhelming memory of today and turn the songs that spread to both North and South into a solemn grand symphony for our people."

The concerts marked another step in the recent mood for rapprochement, which began with North Korea's participation in the Winter Olympics in South Korea's PyeongChang in February.

South Korean President Moon Jae-in is set to meet with North Korean leader Kim Jong-un later this month to discuss the denuclearization of the regime. US President Donald Trump is also due to hold a summit with Kim before the end of May.

Kim, the party official, said the exchange of concerts -- first by North Korean artists in the South, and then by South Korean performers in the North -- was a "moving" demonstration of the "new spring of hope" that could come in the future.

"I take this opportunity to wish for continued occasions for reconciliation and unity between artists of North and South," he was quoted as saying in a toast.

South Korean Culture Minister Do Jong-whan hailed the performances as a step toward opening the door to peace ahead of the third inter-Korean summit.

"These were our first concerts (in North Korea) in 13 years," he said. "We must not let ourselves meet once every dozen years again."

Another concert should be held in Seoul this fall, as proposed by the North Korean leader, he added.

The art troupe, along with a taekwondo demonstration team, left Pyongyang to return to Seoul early Wednesday.(Yonhap)