South Korean LPGA golfer Park In-bee has accomplished virtually everything a golfer can in a career: seven majors among her 19 LPGA wins, an Olympic gold medal and a place in the LPGA Hall of Fame.

And what's left for the 29-year-old? Just to enjoy the game of golf.

"I should be really ready to enjoy tournament golf. But that's something that I haven't been able to do, and that's what I'm trying to do," Park told a press conference before the start of the ANA Inspiration, the season's first major, at Rancho Mirage, California, on Wednesday (local time).

"No matter how much you tell yourself that now you can really enjoy, you can enjoy missing a cut, you can enjoy shooting 77, it's just hard to do as a professional golfer," she added. "I was never able to do it without results. That's some kind of goal that I have been really setting myself up for this year and on -- just trying to enjoy what I am doing, no matter what the result is." 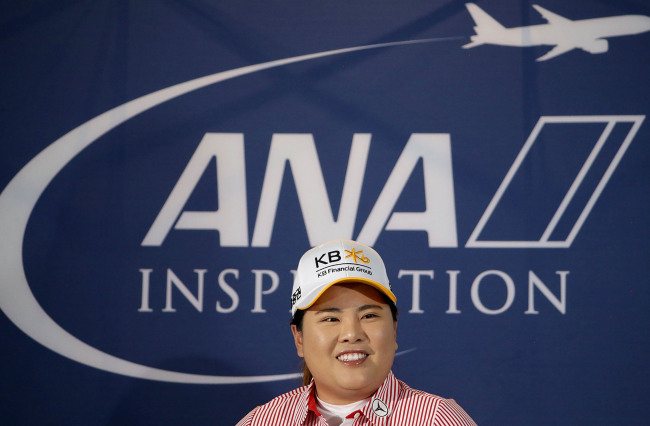 Park In-bee of South Korea addresses the media ahead of the ANA Inspiration at Dinah Shore Tournament Course at Mission Hills Country Club in Rancho Mirage, California on Wednesday (local time). (Photo courtesy of LPGA-Yonhap)
Park missed the final month or so of the 2017 season with some back problems. She returned to action in early March and won the Bank of Hope Founders Cup in Phoenix two weeks ago, in just her second start of the year.

She said after that victory that she had used the time off from the tour to take a step back and smell the roses. And Park wants to keep the same approach heading into the major championship this week.

"Sometimes I thought because I achieved a lot, I should be feeling more pressure," she said. "But now after a couple years taking a little bit of a break, I kind of realize, 'Why did I do that? I didn't have to feel the pressure.'"

While battling injuries in recent seasons, Park has seen the rise of younger South Koreans, such as Park Sung-hyun and Ryu So-yeon. Maybe Park In-bee hasn't been entirely forgotten in the mix, but clearly other golfers have stolen her thunder.

But Park said she doesn't mind it at all.

"I sometimes like being a little bit under the radar," she said. "It takes a little bit of the pressure off and I can try to just play golf. Not much else going around has been very enjoyable, I should say."

Of the venue this week -- Dinah Shore Tournament Course at Mission Hills Country Club -- Park said, "(It) really suits me." ANA Inspiration is held at the same course annually, and Park won the tournament in 2013 when it was called the Kraft Nabisco Championship. She has never missed the cut in her 11 previous appearances.

"The course is in great shape. The greens are hard and fast, and the rough is up," she said. "I hope we get a couple days of wind, and a couple of days of calm days so we can mix it up. In 2013, I remember the golf course was playing very tough, and I was able to play really well in those conditions, so I think hopefully that gives me some kind of confidence that I can still play and post some good scores even in hard conditions."

Park has been consistently among the LPGA's best putters and it was her short stick that lifted her to the title in Phoenix. But the putter deserted her the following week in Carlsbad, California, where Park tied for 18th at the Kia Classic.

"Hopefully, I'll get something like Phoenix where I can look at the putt and feel like, 'Oh, I think I can make this one,'" she said. "You just kind of need that confidence and that feeling when you're putting well." (Yonhap)