Japan's Kyodo news agency reported earlier that a high-ranking North Korean official appeared to have taken a train across the border, although it was unclear whether it was Kim. 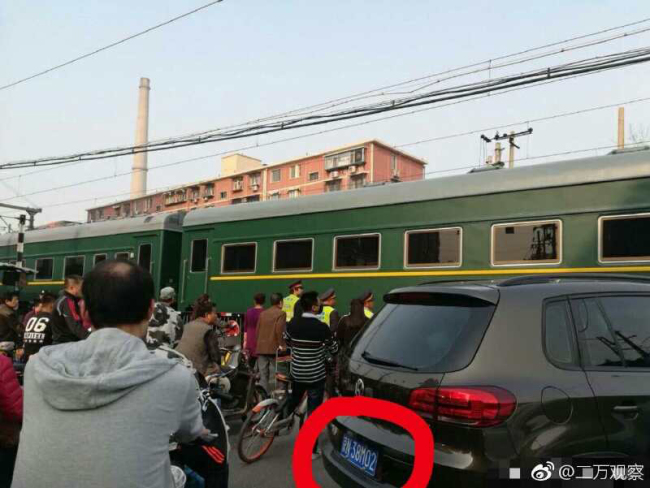 A North Korean train is spotted in the city of Beijing amid rumors that a high-ranking official from Pyongyang might be making a trip to China. (Yonhap)
"We can't confirm those reports. We don't know if they're necessarily true," White House deputy spokesman Raj Shah said during a regular news briefing.

Kim is not known to have left his country since he took power upon the death of his father and then leader, Kim Jong-il, in late 2011.

Ties between Pyongyang and Beijing -- the North's only major ally and economic benefactor -- have deteriorated significantly under the junior Kim as the regime has advanced its nuclear weapons and ballistic missile programs.

Still, if Kim's visit to Beijing is confirmed, it would come ahead of his first meeting with South Korean President Moon Jae-in, slated for late April, and an unprecedented summit between the US and North Korea.

U.S. President Donald Trump has said he will meet with Kim before the end of May to discuss the regime's denuclearization.

North Korea has yet to confirm the meeting will take place.

Shah claimed the administration's "maximum pressure" campaign brought the North Koreans to the table. The US-led global initiative has led to increased economic sanctions and diplomatic isolation for Pyongyang.

"So we're looking forward to a potential summit some months in advance," the spokesman said.

In Seoul, South Korea's presidential office, Cheong Wa Dae, said it could not verify the reports.