South Korean golfer Ji Eun-hee has picked up her fourth career LPGA victory in California, powered by an ace on the back nine.

Ji won the Kia Classic at Aviara Golf Club in Carlsbad, California, with a four-round total of 16-under 272 on Sunday (local time). Her final round of five-under 67 included a hole-in-one on the 14th hole, as Ji beat two Americans, Cristie Kerr and Lizette Salas, by two strokes.

This was Ji's first win since October last year. The world No. 38 had gone more than eight years between her second and third titles, but only had to wait five months to collect her fourth. 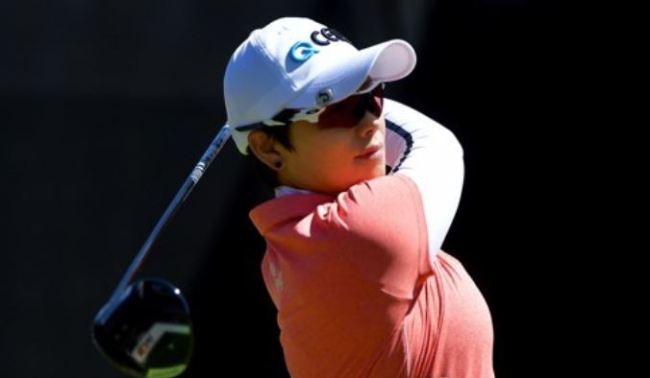 Ji Eun-hee of South Korea tees off at the first hole during the final round of the Kia Classic on the LPGA Tour at Aviara Golf Club in Carlsbad, California, on March 25. (Yonhap)
"I hit it pretty well today. I drove the ball really nicely, and I holed in nice putts," Ji said afterward. "I am really confident, and I am trying to get the same feel for next week (at the ANA Inspiration, the season's first major)."

Ji, 31, is also the second straight South Korean to win on the tour this year, after Park In-bee won the Bank of Hope Founders Cup in Arizona.

Ji started the final round tied at the top with fellow South Korean Kim In-kyung and Salas at 11-under, and eight players were within two strokes of the lead after three rounds on the crowded leaderboard.

Ji had her first birdie of the day at the fourth hole but fell off the lead briefly. Ji then shot to the top at 15-under with three straight birdies starting at the sixth. Another birdie at the 10th took her to 16-under, two shots clear of the field.

Kerr, who led after the second round, made a late charge with four birdies on the back nine. But moments after Kerr got to 15-under with a birdie at the 16th, just one shot behind Ji, the South Korean scored the ace at the par-three 14th to reach 18-under.

Ji bogeyed the next hole but Kerr also bogeyed the 17th to allow the South Korea to maintain her three-stroke lead with three holes to play.

Ji missed just one fairway and hit all greens in regulation in the final round.

Among other South Koreans, Kim In-kyung ended in a tie for fourth at 13-under, after an up-and-down final round of 70. She had five birdies against three bogeys.

Lee Jeong-eun finished another stroke behind in a three-way tie for seventh. Ko Jin-young and Choi Hye-jin shared 10th place with two others at 11-under.

Six tournaments so far this season have produced six different championships -- three from South Korea and three from the United States. (Yonhap)