[ The Korea Herald – Send E-mail ]
Political parties clash over Moon administration’s proposed Constitutional amendment bill
By Jo He-rim
Published : Mar 21, 2018 - 07:25
Updated : Mar 21, 2018 - 11:25
Political parties clashed Tuesday over a constitutional revision plan, while the government presented elements of its amendment proposal to the public. The government is expected to present the bill to the National Assembly on Monday.

While the move to revise the basic law was initiated by the National Assembly early last year, lawmakers across the aisle are struggling to narrow their differences to draw up an amendment bill. The Moon Jae-in administration presented its own bill Tuesday to push its plan to put the amendment to a national referendum in tandem with local elections slated for June 13. 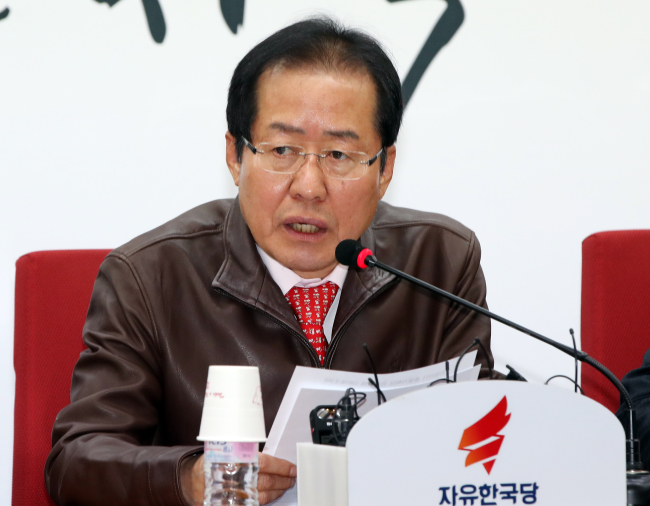 “Anyone who attends the plenary session to take part in the voting procedure for the government proposal will be stripped of their party membership,” Hong Joon-pyo, chairman of the conservative party, said in a party meeting, hinting that the party would boycott the parliamentary session.

“It has become obvious that the government’s push for constitutional revision is for (winning) the local elections.”

The conservative party currently has 116 parliamentary seats, enough to block the passage of the government-led constitutional revision.

For the basic law amendment bill to be put to any kind of referendum, it needs the approval of at least two-thirds of the members at the National Assembly. As there are currently 293 lawmakers, the government bill needs votes from at least 196 lawmakers.

The National Assembly established a special committee for constitutional reform in January last year amid rising calls for changes to the basic law, which was last amended in 1987. But political parties have failed to reach agreement on the details, including the presidential and election systems, and also, when to put the amendment bill to a referendum.

The main opposition raised concerns that it would be too hasty and criticized the government’s “unilateral” push. Stressing that it understands the need to change the basic law this year, it proposed to come up with an agreed bill by June and put it to a referendum afterward.

The center-right minor opposition Bareun Mirae Party also criticized the government’s plan to table the bill next week for a June referendum, seeing it is an attempt to raise the voting rate. As the ruling Democratic Party of Korea currently enjoys high support ratings in polls, a high turnout at the local elections is likely to create favorable conditions for the liberal party.

Meanwhile, the ruling party criticized the conservatives, calling them irresponsible.

“The Liberty Korea Party, the party that carries heavy responsibility to push for constitutional revision at the National Assembly, represents itself as the most irresponsible,” Rep. Woo Won-shik, the ruling party’s chairman, said in a party meeting Tuesday.

“They should take part in the negotiation so as to make sure that the ‘train for constitutional revision’ reaches its destination, rather than be obsessed with how to make it derail,” he added, denouncing the strong remarks made by the opposition.

President Moon Jae-in had pledged to hold a referendum on the constitutional revision on June 13, when local elections take place, citing benefits such as that the country would save some 120 billion won ($111 million) in costs for a separate referendum.

Rep. Lee In-young, the chief member for the ruling party at the parliamentary committee for law reform, said the latest date would be around April 20 for the lawmakers to come up with a parliamentary proposal, considering the time needed to review and pass the bill would take about 45 to 50 days before putting it to a referendum on June 13.

With the parties struggling to agree on the details, a major sticking point is the presidential system. The ruling party seeks to change the current five-year presidency into a four-year term that allows for one re-election. The main opposition advocates a system in which a prime minister is picked by the parliament, to share the power that centers on the president.