Park jumped 10 spots to reach No. 9 in the rankings released Tuesday. She won the Bank of Hope Founders Cup in Phoenix over the weekend, for her first LPGA win in 12 months.

Park, former world No. 1, cut her 2017 season short in September with a back injury while she was No. 10 in the world, and dropped out of the top 10 by the end of October. 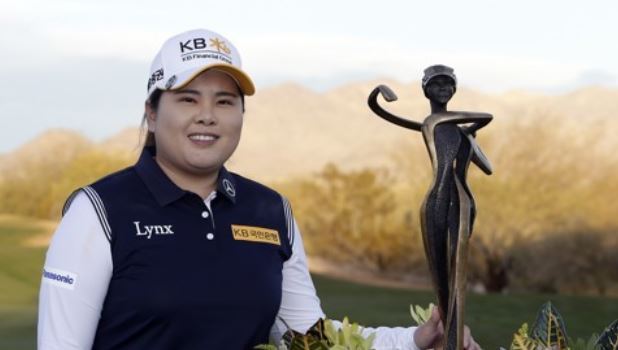 In this Associated Press photo, Park In-bee of South Korea poses with the champion`s trophy after winning the Bank of Hope Founders Cup on the LPGA Tour at Wildfire Golf Club at JW Marriott Phoenix Desert Ridge Resort & Spa in Phoenix, Arizona, on March 18. (Yonhap)
By winning in just her second start of the new season, Park became one of six South Koreans among the world's top 10.

Ryu So-yeon and Park Sung-hyun, who shared LPGA's Player of the Year honors last year, remained the two best South Koreans at No. 3 and No. 4, respectively. Kim In-kyung slipped a notch to No. 7, while Chun In-gee stayed put at No. 8. Korea LPGA star Choi Hye-jin dropped a spot to No. 10.

Feng Shanshan of China remained at No. 1 for the 19th week. (Yonhap)