The LPGA Hall of Famer won the Bank of Hope Founders Cup at Wildfire Golf Club at JW Marriott Phoenix Desert Ridge Resort & Spa in Phoenix, Arizona, on Sunday (local time). Park shot a five-under 67 in the final round for a four-day total of 19-under 269, beating three players by five strokes for her first victory since last March.

Park also won in just her second start of the season. She skipped the first three tournaments of the season before making her season debut at the HSBC Women's World Championship in Singapore as the defending champion earlier this month. 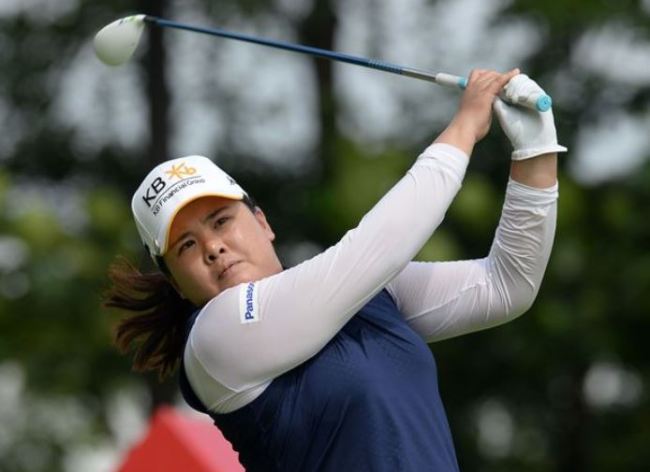 Park In-bee of South Korea tees off on the first hole during the final round of the Bank of Hope Founders Cup on the LPGA Tour at Wildfire Golf Club at JW Marriott Phoenix Desert Ridge Resort & Spa in Phoenix, Arizona, on March 18. (AFP-Yonhap)
She ended tied for 31st then but looked very much like her old self this time. She took a one-stroke lead into the final round at 14-under, thanks to a blistering third round of 63 that included seven birdies and an eagle.

Park opened Sunday with a birdie on the first hole of the par-72 course. She had a string of 10 straight pars before reeling off four straight birdies, starting at the 12th hole, to reach 19-under. She was clinging to a one-shot lead at one point, but the birdie barrage gave her much-needed breathing room.

Park's last bogey of the tournament came at the 18th hole in the second round.

Wielding a new putter this week, Park needed just 115 putts over four rounds, including only 55 on the weekend. Always a consistent ball striker, Park missed only six fairways and hit 60 of 72 greens in regulation.

Laura Davies, a 54-year-old World Golf Hall of Famer, came up short in a bid to grab her first LPGA victory since 2001, as she tied for second at 14-under with Marina Alex and Ariya Jutanugarn.

Park ended her 2017 season prematurely in September with a back injury, which she first sustained at the Ricoh Women's British Open in early August and aggravated while traveling to Canada for the Canadian Pacific Women's Open three weeks later. She withdrew from that tournament and also missed last week's Evian Championship, the last major tournament of the season, in mid-September.

"It feels great, especially after the long break. I didn't know how I was going to do out on the field," Park told LPGA.com. "Being able to contend and win is a great feeling. Everything was really solid this week, from ball striking to putting, and hopefully, I can keep this going."

Park also said she didn't expect to win so early in the season. She added that she was happy with her ball striking in Singapore earlier this month and felt she just needed to work on her putting to take the next step.

Park is the second South Korean winner of the 2018 LPGA season, after rookie Ko Jin-young, who won the ISPS Handa Women's Australian Open in February.