[ The Korea Herald – Send E-mail ]
[Newsmaker] Engle in tug-of-war over fate of GM Korea
Will ex-head of GM’s Latin America operations save Korean unit?
By Cho Chung-un
Published : Mar 13, 2018 - 14:18
Updated : Mar 14, 2018 - 09:11
A week after General Motors announced that it would be shutting down one of its plants in South Korea, an executive in charge of the US carmaker’s overseas operations made yet another rare move.

On Feb. 20, Barry Engle, the president of GM International, visited the parliament to meet lawmakers apparently uneasy over the carmaker’s restructuring plan.

While shaking hands with lawmakers suspicious of the fate of GM’s remaining operations here, he said that the carmaker wants to stay and continue its business. But that will be only possible if the Korean government injects fresh investment to revive its money-losing business.

His remarks at the closed-door meeting made headlines nationwide. However, the meeting itself raised questions about the company’s motive.

After the meeting, some lawmakers said that GM seems to have the intention of continuing its business in Korea. But the executive refrained from giving answers on sensitive issues, such as suspicions that the carmaker has been “intentionally” inflating losses so that it would have an exit cause. 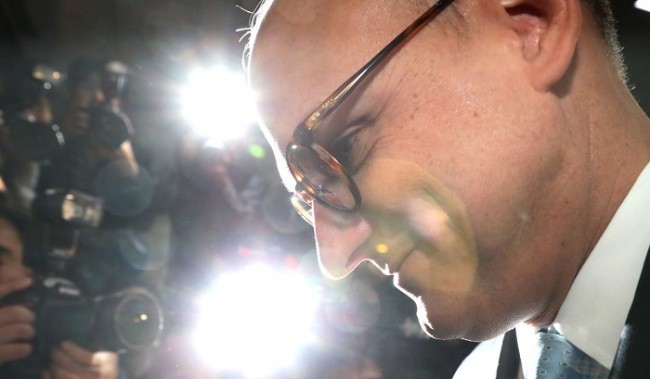 President of GM International Barry Engle (Yonhap)
Critics even called his visit to the National Assembly a part of a strategy devised to pressure the government by turning to lawmakers concerned about losing votes.

“He appeared to have done his homework. He knows who key decision makers are, as well as the complexity of the process that public sentiment and regional interests have huge influences on policy works,” said Kim Pil-soo, an automobile engineering professor at Daelim University.

“It is difficult for the government to make such a decision of injecting taxpayers’ money without considering the political climate. The government’s labor-friendly principle, for now, is the weakest point in negotiations with GM.”

Engle has visited Korea four times since he became the president of GM International on Jan. 1, suggesting that GM Korea is top on its restructuring list.

GM International is responsible for the carmaker’s global operations except for China and US.

From labor union representatives to ministers related to the auto industry and the Korea Development Bank, the second-largest shareholder of GM Korea, Engle has met most of the stakeholders -- some several times -- to push GM’s demand.

He is not just a messenger for GM CEO Mary Barra, but also holds full authority in decision making in regard to GM’s international business, according to a GM Korea official.

“He has made noticeable progress (in negotiations with the government and KDB) on starting the due diligence process and filing applications for designating plant sites as foreign investment zones along with an investment plan,” he said.

“He could return anytime if things are not speeding up enough.”

His previous position as the president of GM’s Latin America operation may have showed him the way to handle a management crisis, the official said.

Formerly with Ford, Engle joined GM in 2015, taking charge of the carmaker’s South America operations. Late last year, the US carmaker said he would be replacing Stefan Jacoby, former president of GM International.

GM’s Brazil operation was on the verge of collapse since early 2010.

It is not known how exactly Engle contributed to resuscitating the operation there. But it was during Engle’s tenure that GM made a surprise announcement that it was injecting fresh investment worth 1 trillion won, which overturned the general view back then of its eventual departure from the country.

GM is the largest carmaker in the Brazilian market, with 18.8 percent of market share, beating Fiat and Volkswagen, according to reports.

The success of GM Brazil has raised hope that GM Korea could follow in its footsteps.

However, the situations in Brazil and Korea are completely different, say industry insiders and observers.

GM was confident of the Brazilian market along with its emerging economy and rising domestic demand. Despite its market share of 15 percent, GM Korea has been losing ground to European cars and domestic brands that are price competitive and high quality, they said.

Indeed, the US carmaker seems to have a concrete plan and is moving according to a certain scenario, said professor Kim.

While Engle has the full authority to represent GM, the company is dealing with the KDB as well as the ministries of industry, finance and transport. Kim highlighted that the government has no control tower with regard to handling the automobile business.

“No one holds the full authority to handle the case,” he said.

“If the government wants to make GM stay, it should be dealing with the carmaker with one voice. Otherwise, Korea will lose its bargaining power and lose money for a company which might be leaving in the near future.”